HERITAGE HIGHLIGHTS:   Anne of Cleeves House, a historic Tudor building with connections to Henry VIII and his fourth wife. 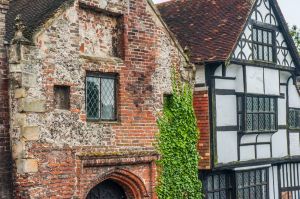 Wings Place, Ditchling
An ancient village dating to at least the year 765 AD. Ditchling has been owned at times by Alfred the Great and Edward the Confessor. The parish church of St Margaret of Antioch dates to the Saxon period, with much Norman rebuilding.

Opposite the church is Wings Place (formerly Anne of Cleves House), a Tudor building that formed part of Henry VIII's divorce settlement with Anne, his fourth wife. There are two popular nature reserves around Ditchling.

To the north is Ditchling Common Country Park, while to the south is Ditchling Beacon Nature Reserve, which has at its core an Iron Age hillfort that was later occupied by the Romans.

Back in the village itself, Ditchling Museum tells the story of the village and its long history, with displays ranging from the Iron Age, to the present day, with an exhibition of Ditchling's role as a centre of the Arts and Crafts Movement during the early 20th century.

More self catering near Ditchling >>

More bed and breakfasts near Ditchling >>