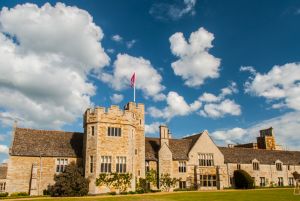 This historic castle and stately home stands in a glorious position overlooking the Welland Valley, giving views over five counties. Rockingham Castle was built by William the Conqueror, who must have realized the strategic importance of the location, for he raised a motte here, set between two baileys.

William's son, William II, came here in 1095 for the Council of Rockingham, which attempted to reconcile the king to Anselm, Archbishop of Canterbury.

The castle was in royal hands for over 450 years and was essentially a very regal hunting lodge until the reign of Edward III. King John enjoyed the hunting at Rockingham so much that he came here almost every year of his reign. In 1221 the castle's constable, William de Fortibus, 3rd Earl of Albemarle, rebelled against the crown.

Hubert de Burgh, who was essentially regent while Henry III was underage, sent royal troops to attack the castle. The 14-year-old Henry III rode with his troops, but he saw no action, for the garrison fled at their approach and Rockingham was retaken without a struggle.

Henry VIII leased the castle to Edward Watson in 1544, by which time it was in a very poor state. Watson converted the medieval residential ranges into a comfortable house, and for the next 450 years, Rockingham has remained the Watson family home. 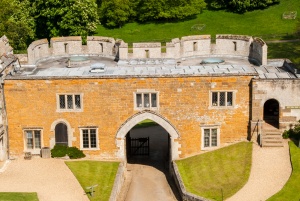 The main visitor entrance from the tower

During the Civil War Rockingham was held by a garrison of Roundhead soldiers. Royalist troops attacked the castle on several occasions, but the defences held. After the war, the castle's main defensive structures were destroyed by Parliament so that it could not be held against them. However, the residential quarters were allowed to remain.

Much of what we see today is Tudor, enclosed within the earlier Norman castle walls. William the Conqueror's castle motte has been levelled, and the southern bailey is almost gone; its location marked by a rose garden.

Part of the curtain wall of the north bailey still stands, with its sturdy stone gatehouse. These surviving structures may have been built by King John, who spent £200 strengthening the castle defences. The core of the house was built by Edward I, and his great hall survives as the centrepiece of the historic interiors. There is a wealth of historic furniture and artwork, including an extensive collection of 20th-century art.

Charles Dickens was a frequent visitor to Rockingham and based Chesney Wolds in Bleak House upon the castle.

Rockingham Castle is set in 18 acres of gardens. One of the most prominent garden features is the so-called 'Elephant Hedge', a 400-year-old circular yew hedge that cuts through the 17th-century formal terraced garden, following the line of the Norman motte and bailey. A 19th century Wild Garden stands below the castle. Here you will find several specimen shrubs and trees, including the 'Handkerchief Tree'.

Castle and garden tours are available, as well as children's activities. The castle organizes numerous special events throughout the year, including Christmas tours, Civil War Costumed Tours, and a Candlelight Supper Tour.

Rockingham Castle has received numerous tourism awards over the past several years, including several citations as Best Small Visitor Attraction.

There's so much to see at Rockingham that it is almost overwhelming. The combination of Norman, medieval, Tudor, and Victorian architecture is outstanding, and the gardens are a delight to wander through on a sunny day. 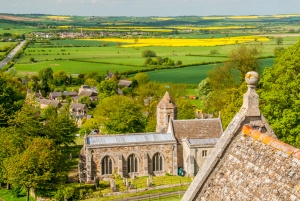 View from the castle walls 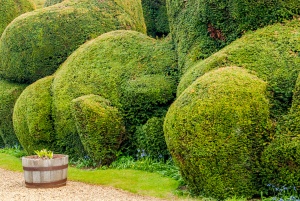 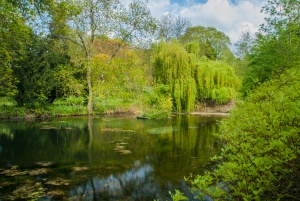 A quiet pool in the woodland garden 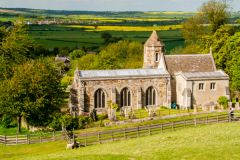 More self catering near Rockingham Castle >>