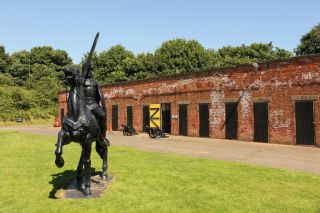 Fort Paull
The first fort at Fort Paull was built in 1542 to protect the entrance to the River Humber. The current fort is the fourth to occupy the same site. It was built in 1862 and was in use until 1950.

The fort occupies 10 acres on the north shore of the Humber. Contained within the 10-acre site are a multitude of hands-on exhibits that will give visitors an experience of over 450 years of military history here.

On the site are a fire service museum, a collection of military memorabilia, and historic aircraft including a 1916 tri-plane and the only surviving Blackburn Beverley Transport Aircraft in the world.

An underground network of tunnels connects different parts of the site, including the old accommodation blocks and exhibit areas.

More self catering near Fort Paull >>

The Old Deanery is a Hotel Restaurant and Bar located directly opposite the stunning Ripon Cathedral in the market town of Ripon North Yorkshire. Our historic building dates back to 1625 so if you're looking for something that little bit different; you won't be disappointed. With 11 unique rooms and …