HERITAGE HIGHLIGHTS:   1533 Jesse window is one of the finest stained glass windows in Wales 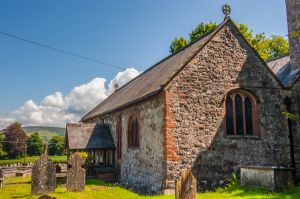 St Dyfnog's church is named after the 6th century saint who lived by a nearby waterfall. The historic highlight at Llanrhaeadr is a superb medieval stained glass 'Jesse Window', depicting the rather imaginative genealogical tree of Christ's ancestry growing from the chest of Jesse.

There is thought to have been a church on this site since the 6th century, but the first written record of a church at Llanrhaeadr comes from the 13th century. That early medieval church was probably built with money raised from pilgrims coming to see the holy well built by St Dyfnog in the 6th century.

Dyfnog was from the line of Caradog, and is said to have been St David's beekeeper. He established a cell here near a small waterfall, and used the well to perform penance by standing in the cold water. He is also said to have stood under the waterfall, wearing a hair shirt and a belt made of an iron chain.

Dyfnog's holiness was said to have imbued the waters with healing properties, and the well became a popular destination for pilgrims; one of the most visited sites in medieval Wales. The water was said to cure diseases as diverse as smallpox, dumbness, deafness, scabs, and itching.

Though it is a very simple site today, the well was said to have been lined with marble in the 18th century, with statues arranged around the outside, and there were changing rooms for pilgrims so they could bathe in the healing waters. 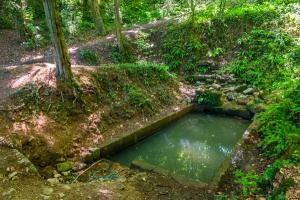 The well consists of a rectangular stone-lined pool, fed by several springs. The water is only about 18 inches deep. The well is not on church land, but can be reached through a signposted gate in the churchyard, which leads to a landscaped path through attractive woodlands, laid out in the 19th century.

The stream of pilgrims helped the church raise enough money to build this attractive medieval building in the 13th century. It was restored in the 15th and 16th centuries and completely rebuilt in the 19th century. The church is built to a twin-nave design, with a west tower and two-storey timber porch built around 1530. The porch is beautifully decorated with carvings and you can see the empty niche which once held a statue of St Dyfnog over the entrance. The beautifully detailed carving may have formed part of the original medieval rood screen.

The beautifully decorated hammer-beam roof dates to the 15th century - around the same time as the Jesse window - and covers both north and south naves. The north nave roof is decorated with carved figures of angels. Over the altar the roof becomes barrel-vaulted, forming a canopy of honour. 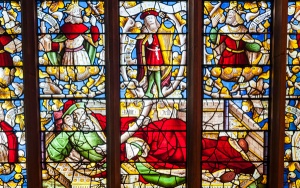 Set in the north nave, this window depicts the imaginary family tree of Christ. It was created in 1533 and has been called the finest medieval window in Wales. We know the date because it is inscribed in the lower right panel. At the base of the window lies a sleeping figure of Jesse, and from his recumbent figure springs a tree with many branches. On each branch are figures of Christ's ancestors, with King David taking centre stage in the middle of the window. At the top of the tree is the Virgin Mary and the Christ-child.

The Jesse tree theme is one that occurs in many medieval windows across Britain, but the Llanrhaeadr window is one of the best-preserved examples and one of the most beautiful. Popular mythology suggests that the window was financed through gifts from pilgrims, but a more likely explanation is that it was the gift of a priest named Robert Jones. During the Civil War, when windows and other idolatrous images were smashed by iconoclasts, the Jesse window was disassembled, put into the rough dugout wooden chest which stands beneath it, and buried in a secret place. It was carefully restored when the Puritanical frenzy of destruction had waned.

In the vestry is still more medieval glass, this time fragmentary. This window is dated 1508 and depicts the Annunciation. It was discovered in a local farmhouse in the 19th century and restored to the church. The west window is formed from fragments of 14th century glass, found in a jumbled heap in a nearby farmyard.

Near the Jesse window is a wonderful carving of a golden pelican. The carving was made in 1762 and used the figure of a similar pelican in the stained glass window for its model. The pelican was a popular religious symbol, building on the mistaken idea that the mother bird feeds its young with its own blood.

Once you tear yourself away from the wonderful stained glass and the medieval roof, you can't miss the rather overwhelming marble memorial to Maurice Jones of Llanrhaeadr Hall. Jones is shown surrounded by weeping cherubs, reclining on one elbow, his periwig cascading in true Queen Anne style. It is a wonderful piece of early 18th century sculpture, erected by Robert's wife Jane. Jones is actually buried on the north side of the church, so the memorial must have been moved to this location on the south side of the nave.

St Dyfnog's church is usually open daylight hours, and even if it is not, you should still be able to access the holy well. 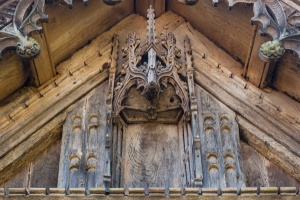 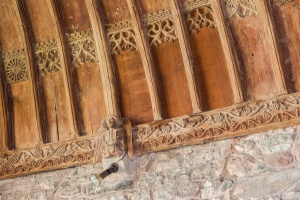 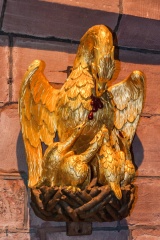 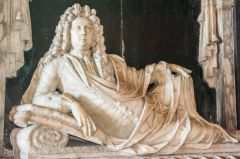 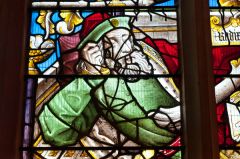 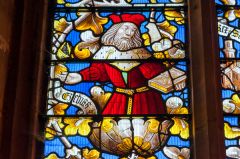 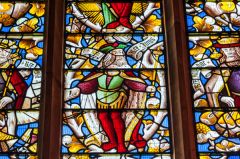 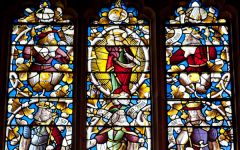 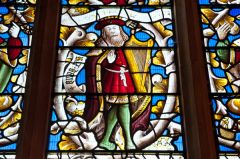