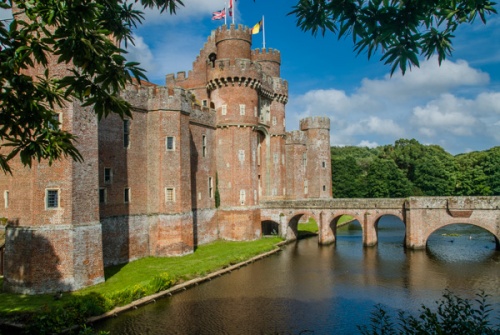 Red brick moated castle of 1440's, built by Ralph Fiennes, whose family crest is displayed over the entrance. Now home to the International Study Centre of Queen's University (Canada), so the interior cannot be viewed. 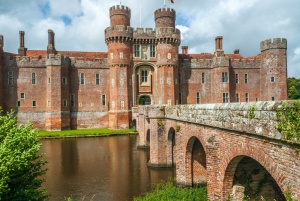 The bridge across the moat

The history of Herstmonceux must start with its rather peculiar name. The manor began as simply Herste, and first enters the written records in the 12th century a family heiress named Idonea de Herste married a nobleman named Ingelram de Monceux. The manor house became known as Herste of the Monceux, and over time this was simplified to Herstmonceux.

The story of the castle itself begins in 1441 when Sir Roger Fiennes, Treasurer of the Royal Household, obtained a license from Henry VI to crenellate his existing manor house. Sir Roger was a veteran of the French wars and had fought with Henry V at Agincourt in 1415.

Fiennes decided to build his castle in brick, now a commonplace building material, but in 15th century England a rare luxury. The use of brick makes it clear that Fiennes intended his grandiose new residence to be a statement of his family's wealth and status. Stone was used only for window and door openings and for corbels. As a 'statement', Herstmonceux was unequivocal; it was the largest private residence in England. 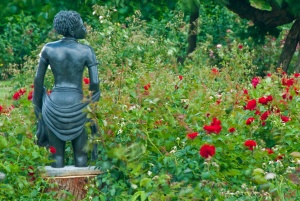 African statue in the gardens

The moated castle is more a complex of buildings than a single fortified house. A curtain wall encloses an area twice as large as that 'other' moated castle in East Sussex, Bodiam, and within the walls was space for a large number of secondary buildings, capable of housing the large household of an important baron.

The Fiennes family maintained their position of importance at court for a century before Thomas, Lord Dacre, made the fatal mistake of falling out with Henry VIII. When a game keeper on a neighbouring estate was murdered, Lord Thomas was implicated, and executed at Tyburn in 1541. Henry seized the Herstmonceux estate, but when Elizabeth I came to the throne she returned it to the Fiennes family.

The Fiennes avoided trouble in the Civil War, and renovated the castle in the late 17th century, adding a suite of fashionable rooms with carvings by Grinling Gibbons. Unfortunately, the cost of renovation and the profligate lifestyle of Lord Dacre bankrupted the family, and they sold Herstmonceux in 1708.

By 1777 the castle was falling apart, and was considered not worth saving. Furniture was sold, the interior furnishings stripped and even the bricks carted off to use in a new house nearby called Herstmonceux Place. The castle became a romantic, ivy-covered ruin, a popular destination for day-trippers from Brighton and Eastbourne.

In 1910 Colonel Claude Lowther bought the estate and began to realise his vision of recreating an elegant country house. During WWII the castle was used by the Hearts of Oak insurance company to store records, and on several occasions was strafed by German planes.

After the war it was purchased by the Admiralty and used as a new base for the Royal Greenwich Observatory. Then in 1994 the castle was transformed into its current role as an international study centre under the auspices of Queen's University (Canada).

Though the interior is rarely open due to its academic use, visitors can explore the outside, and take a short stroll to the utterly compelling gardens behind the castle. The gardens include a wonderful nature trail through woodlands, a secret garden and folly beside a lovely lake, an orchard, herb garden, chestnut walk, birch walk, an Elizabethan garden and rose garden, and a butterfly garden. Scattered throughout are strange and provoking sculptures including a peculiar pyramid folly.

I thoroughly enjoyed my visit to Herstmonceux; the sheer scale of the castle is staggering, and on a sunny day, with the red-brick frontage reflected in the moat, it really is an unforgettable sight. 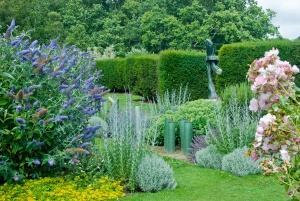 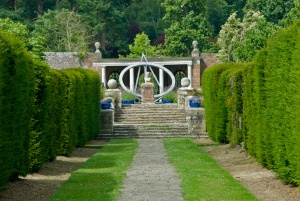 A pathway in the formal gardens 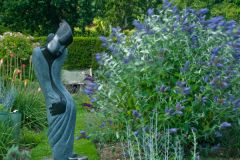 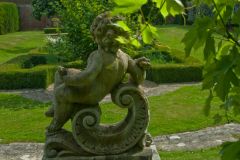 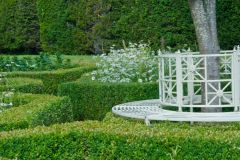 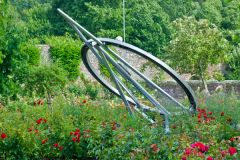 More self catering near Herstmonceux Castle >>