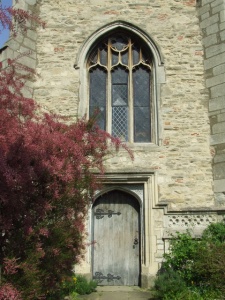 The church is more notable for its literary associations than any architectural significance. It was here in 1653 that John Bunyan received his spiritual awakening. The Independent Bedford Gospel Church under the leadership of Rector John Gifford met in St John's.

Gifford was an interesting character - a bit of a hell-raiser in his youth, he found religion and cleaned up his life. His conversations with Bunyan led the latter to his own conversion. They often met in the rectory, which still stands near the church.

Bunyan became a leading supporter of Gifford, and when the rector died, Bunyan was chosen to replace him as the preacher. It was in this role that Bunyan raised the ire of the authorities. He was eventually arrested and tossed in gaol for 12 years, there to write his masterwork, Pilgrim's Progress.