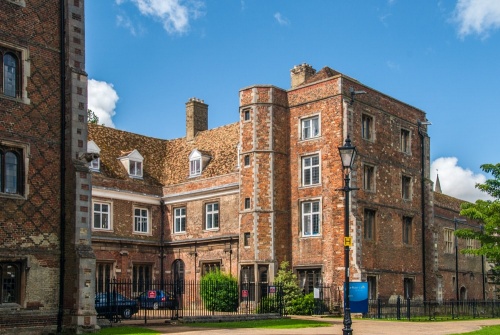 Beside the cathedral in the heart of Ely is a second medieval building which often gets overlooked by visitors who flock to the cathedral. This is the Bishop's Palace, built in the late 15th century by Bishop Alcock (1486-1501), whose family crest appears above the second-floor canopy. Bishop Alcock's Palace incorporates part of an earlier deanery; the guest hall dates to the 13th century.

The palace consists of two wings joined by a central hall, to which a 100-foot long gallery was added in the early 16th century.

During the reign of Elizabeth I the Palace was used as a prison for Catholics. From 1588-97 it was reserved for lay recusants only. One of the inmates was Thomas Tresham, who was held here on four separate occasions.

In the garden is the oldest plane tree in England, planted by Bishop Gunning more than 300 years ago. The gardens are divided into separate areas by medieval walls and the monk's kitchen area is now the rose garden. In the rose garden is a parterre created by low box hedges.

In 2013 the old palace opened as a co-educational day and boarding school called King’s Ely. The Palace is, however, usually open to the public for the annual Heritage Open Days in September.

More self catering near Bishop's Palace