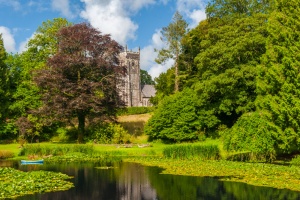 St James church stands on a rise of ground just east of the stately home of Arlington Court, home of the Chichester family since the 14th century. The church dates to the late 15th or early 16th century.

The medieval building was replaced by Sir John Chichester of Arlington, 1st Baronet, in 1846. The Chichester family chose architect RD Gould as their architect, and Gould almost completely rebuilt the medieval church, sparing only the 14th-century tower. The tower rises in 3 stages to an embattled parapet topped by crocketted pinnacles. At the west corner is a polygonal stair turret.

Another 14th-century remnant is an effigy of a woman, set into a niche in the north wall of the chancel. The effigy is thought to be Thomasine Raleigh, one of the De Raleigh family who owned the manor before it passed by marriage to the Chichesters in 1365. Though the Chichester family owned the manor, they were Catholic and were barred from involvement in church affairs for several centuries after the Reformation. 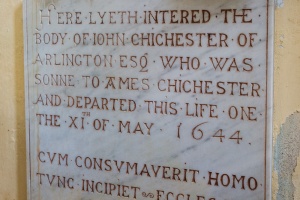 The interior is almost entirely a product of the Victorian restoration. The wine-glass pulpit and octagonal font are among the 19th century highlights. The wooden font cover is partly made with reused timbers from the medieval belfry.

Inside the church are several very fine memorials to rectors of the parish, including an exceptional monument to Gascoigne Canham, a rector who died in 1667. Just before his death, Canham granted the living of Arlington to Gonville and Caius College in Cambridge in perpetuity. On the south wall of the nave is a memorial to a former rector named Edward Bampfield (d.1719), and on the north wall is another Bampfield memorial, to William Bampfield, another rector, who died in 1719.

Set into the floor are grave slabs to John Chichester (d.1644) and Robert Chichester (d.1622). There is very good Victorian stained glass, with the most colourful being the vibrant west window, commemorating the Chichester family of Arlington Court.

The east window was installed in memory of Rev. James Chichester in 1884, while Major George Chichester (d. 1876) is remembered by a memorial window on the north wall of the chancel. Opposite is another Chichester memorial window, to Robert Chichester, who died in 1883.

One relatively modern memorial deserves mention; the National Trusty has erected a wall monument to Rosalie Chichester, who bequeathed Arlington Court to the Trust in 1949. Though the monument is recent, it is very much in the style of the 18th century and fits very well with other Chichester memorials around the church.

I suspect that most people visiting Arlington Court give the church a miss. That's a shame, for though there are very few medieval features remaining, its a lovely church, in a beautiful setting in the grounds of the Court, and well deserves some time spent exploring.

The church can be reached off the end of a lane from Arlington village, where a public footpath leads through the Court grounds, or if you are visiting the Court there are signposts from the house and other parts of the grounds. 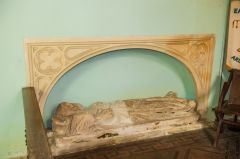