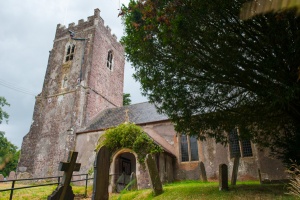 There was a 12th-century church at Cadeleigh, on a rise of high ground above the valley of the Exe. That Norman building was rebuilt n the early 15th century to create the building we see today.

The layout is simple, with a nave and north aisle, chancel, south porch, and late 14th century west tower. The interior furnishings date mostly to a 1766 renovation, and are fairly rustic, with one major exception.

In such a simple country church it almost comes as a shock to find the ornate early 17th century Leach monument in the north aisle. This deliciously ebullient memorial was erected by Sir Simon Leach (1567-1637) in memory of his second wife, Lady Katherine (nee Turberville). Sir Simon was born the son of a Crediton blacksmith but rose to become Sheriff of Devon.

The memorial is made of Beer stone, enriched by Devonshire marble pillars, and shows effigies of Sir Simon and Lady Katherine lying recumbent, under a canopy supported on Corinthian columns, with kneeling figures of their 9 children below. The detail of the carving and the rich materials are quite exquisite, and this must rank as one of the finest monuments in any parish church in Devon. 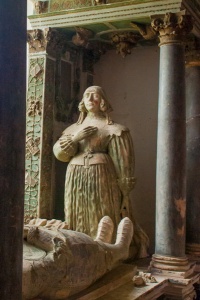 It was likely erected during Sir Simon's lifetime; though other family members are named in inscriptions, Sir Simon is not mentioned by name. The quality of the stonework and painting is simply outstanding.

Sir Simon's first wife, Bridget Higgons (d. 1691) did not seem to rate so grandiose a memorial (one wonders what sort of family dynamics were at work?) but she is remembered in a memorial set against the east wall of the aisle, with a classical urn atop a marble pedestal, and an inscription within a wreath on the front.

In the chancel is a worn 17th-century wall tablet framed by Corinthian columns topped by skulls; the inscription is too worn to read clearly. Much of the glass is late Victorian, including a window in the aisle by the London firm of Clayton and Bell.

The nave, chancel, and aisle are all barrel-vaulting, with painted ribs and wonderfully carved late medieval bosses, depicting grotesque faces, saints, foliage, wheels, and sacred monograms. The Tudor capitals in the nave are also quite wonderfully carved, with intricate foliage designs.

Box pews were fitted in the mid-18th century when the walls were decorated with beautifully decorated plaster panels. As for the rather plain font, English Heritage calls it 'of uncertain date'; it could well be medieval, and it has almost certainly been recut at some point, obscuring any details which might suggest a date.

If it were not for the Leach monument I'd call St Bartholomew's an interesting rural church, but the presence of the superb memorial makes it an exceptionally rewarding historic building to visit. Honestly, I'm in awe of the artistry and craftsmanship displayed by the sculptors who created this and similar monuments. 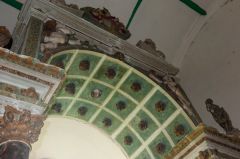 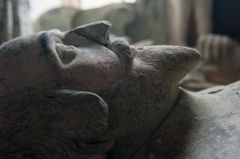 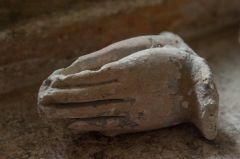 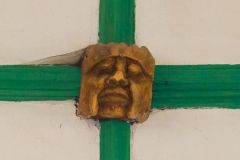 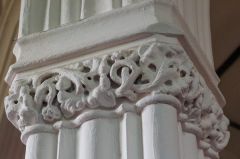 More self catering near Cadeleigh

More bed and breakfasts near Cadeleigh