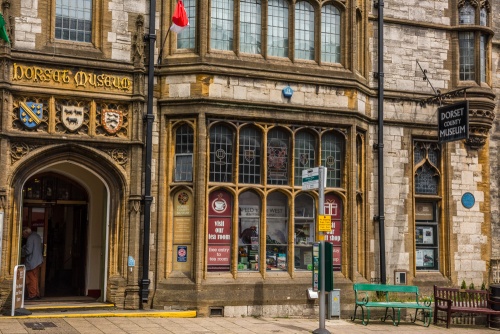 The Dorset County Museum traces the natural, archaeological, social, and geological history of the county of Dorset. The impetus for the founding of the museum came with the arrival of the Great Western Railway to Dorset in 1845. It seems that the railway route threatened several important archaeological sites.

This aroused Dorset residents to action; they successfully lobbied the head of the GWR, the famous engineer Isambard Kingdom Brunel, to change the proposed route of his line, and the following year this museum was founded to ensure that the preservation of Dorset's heritage was continued. Since 1884 the museum has been housed in a purpose-built building on High West Street.

The museum displays no less than 12 Roman tile mosaics, most found in association with the Roman town of Durnovaria, the original Dorchester. During the 4th century, there was a distinctive Durnovarian School of tile design, based on motifs of the sea, with sea gods and goddesses, and mythical sea creatures. Most notable is a pavement found in Durngate Street, Dorchester, in 1905. It is one of the few Roman mosaics in England to bear a "signature" - in this case a fruit and leaf.

The Dorset area is especially rich in fossil remains, particularly from the Jurassic period. The museum's collection includes several: ichthyosaurs, a plesiosaur limb, plus iguanodon and megalosaurus remains. Dinosaur aficionados will appreciate seeing the autographed notebook of Mary Anning, the young girl who unearthed a massive ichthyosaur from the cliffs at Lyme Regis.

The museum boasts a strong collection of finds from several prehistoric sites in Dorset, including Bronze and Iron Age pottery, flint tools, burial goods, and metal implements from Maiden Castle. Especially vivid are the remains of Celtic warriors unearthed at Maiden Castle, showing distinct marks of the Roman weapons that killed them. There are numerous finds from Roman Durnovaria (see above), as well as later medieval and industrial artefacts.

The focus of this collection is plants and animals from within the boundaries of Dorset, including insects, birds, molluscs, marine invertebrates and plants, and much more. Included are a collection of 5,000 native herbs, as well as bird specimens collected by local resident Alfred Wallace, a contemporary of Charles Darwin, on his travels around the world.

The museum boasts a wide-ranging collection of items relating to work and everyday life in Dorset through the ages. Included are agricultural tools and rural crafts, costumes, toys, a 19th-century fire engine, chapel organ, and much more. The Library contains old maps, research papers, and most books published on Dorset subjects.

The Art section of the museum features thousands of works by famous and obscure artists on Dorset themes, from topographic studies to impressionistic watercolours. Of great interest are the works of Henry Joseph Moule, the first curator of the museum and teacher of Thomas Hardy.

It would be hard to imagine a museum of Dorset life without a mention of Thomas Hardy and his popular novels of Wessex. Many of Hardy's books and personal objects are on display, including the original writer's manuscript of The Mayor of Casterbridge, which the author presented to the museum in 1911.

As well, there is a recreation of Hardy's study as his home in Max Gate, Dorchester. Another writer prominently featured in the museum's Writer's Gallery is "the Dorset Poet", William Barnes, the foremost writer to compose in the native Dorset dialect.

Unfortunately, the museum does not allow photography of their exhibits so I can't share any images from my visit.

More self catering near County Museum