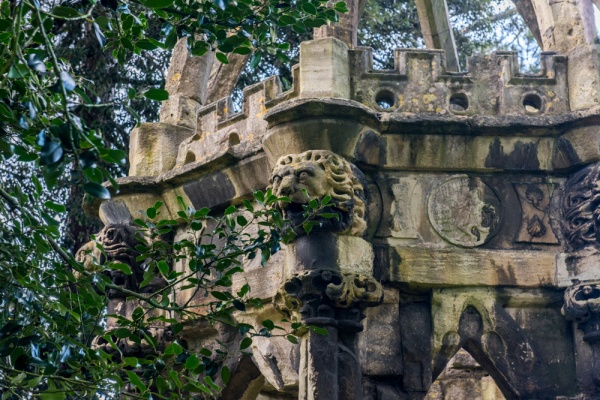 In 1636 John Scriven, a wealthy Gloucester ironmonger, Mayor, and Alderman, gave money for a conduit house to be built on Southgate Street, near its junction with Bell Walk, with water supplied by lead pipes from Robins Wood Hill. A pair of 17th-century well heads still survive on the hill.

The conduit house, though it had a practical purpose, was highly decorative as well. It was an octagonal structure, surmounted by a corona of slender ribs, and decorated with carved stone medallions depicting the resources of the Vale of Gloucester. Between the medallions, at the angles of each side, are projecting heads of lions, looking suitably regal, and the finial is carved with allegorical figures. 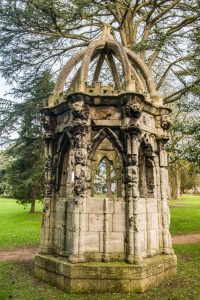 The structure is made of Painswick stone and mixes several classical styles.

The elaborate corona may not have been part of the original structure. Documents show that it the top was rebuilt in 1708, but whether that entailed a completely new decorative top or simply repairing or embellishing the original is not clear. The 18th-century structure was topped with a statue of Jupiter Flavius, the Roman god of rain, who poured rainwater into Sabrina, goddess of the River Severn. The name Sabrina is Latin for Severn.

The conduit house was dismantled in 1784 and re-erected in the grounds of a house on Dog Lane (where the King's Walk shopping centre is now). When the area around Dog Lane was redeveloped in the 1830s the structure was moved again into the grounds of Edgeworth Manor, home of Edmund Hopkinson, High Sheriff of Gloucestershire.

In 1937 it was returned to Gloucester at the same time as the King's Board, and both monuments were re-erected in Hillfield Gardens, a public park on the eastern outskirts of Gloucester. In 2000 the worn figure of Jupiter was removed for safety reasons, and in 2010 the statue of Sabrina followed.

There are 6 roundels carved with allegorical scenes. One depicts a view of Gloucester from the south, with Alderman Scrivens shown on horseback. Another shows Ceres, the goddess of agriculture, and a third roundel shows a seated figure, probably representing Alderman Scrivens. One roundel depicts Bacchus, the god of wine and revelry, pouring wine into a cup. This roundel represents the flourishing wine trade in Gloucester.

Another roundel shows the River Severn with two ships sailing, and the final roundel is too badly damaged to determine what the original carving looked like.

Scriven's Conduit, the King's Board, and the Leper Hospital Chapel all stand within a few steps of each other in Hillfield Gardens. The gardens are open at any time, and can be reached on foot from central Gloucester. If arriving by car your best bet is to find parking in one of the residential streets off London Road. 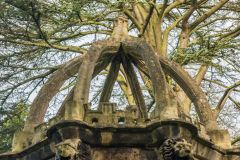 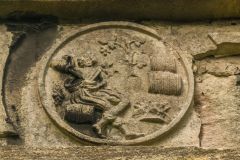 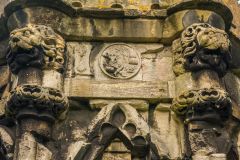 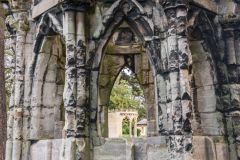 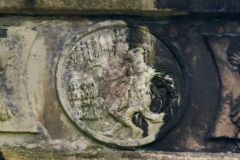 The King's Board - 0 miles (Historic Building)

More self catering near Scriven's Conduit