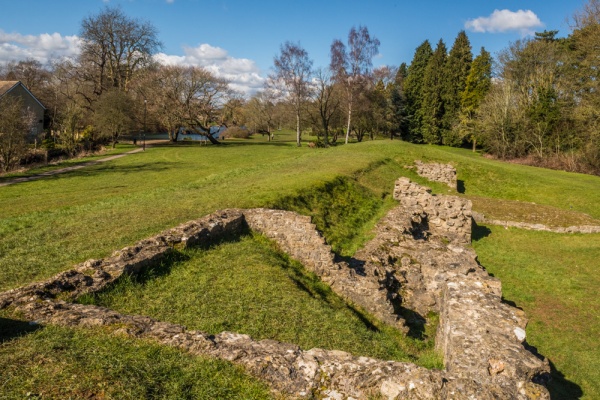 A short section of 3rd-century wall is all that remains of the Roman defences of Corinium, the second largest town in Roman Britain.

The Roman invaders of Britain built a fort in what is now Gloucestershire shortly after their successful invasion in AD 43. A civilian settlement soon grew up outside the fort, and was called Corinium Dobunnorum by the Romans (often shortened to 'Corinium' today). 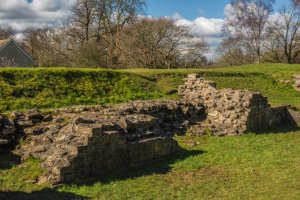 Exposed wall from the east

The area became so firmly under Roman control that the fort was deemed unnecessary and was torn down in AD 75. The settlement prospered however, and grew to become the second-largest Roman town in Britain after London.

Roman Cirencester was defended by an earthwork bank and ditch encircling the settlement, topped by a timber palisade. Outside the earthen town defences stood a huge amphitheatre seating 8000 spectators. The population of Corinium as a whole probably reached 10-12,000 residents.

In the early 3rd century the earthwork defences were rebuilt in stone. The new stone walls stood 6m high with a walk at the top protected by a parapet. At intervals along the walls were polygonal stone towers, and bastions projected from the wall.

The walls were allowed to decay after the Romans departed in the early 5th century, but they were later incorporated into the medieval town walls that encircled Cirencester. Stone from the wall was robbed over time for building projects, leaving only this section in Abbey Grounds and a short turf-covered length in Watermoor, off Beeches Road, where a footpath runs along the top of the wall by City Bank Playing Field (grid reference SP031013) 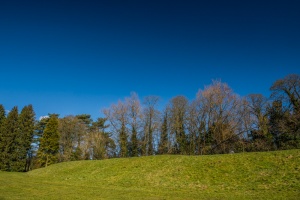 The earthwork western side of the wall

The wall was pierced by at least 4 gates (some sources say there were 5 gates). Three major roads converged on the town. One of these roads was Akeman Street, which linked Cirencester to London and St Albans.

Akeman Street breached the town walls almost immediately beside the remaining section of walls, at what was called the Verulamium Gate, after the Latin name for St Albans. Excavations near the gate revealed deep grooves in the road surface made by horses and carts. The Verulamium Gate stood near the junction of London Road and Corinium Gate.

The only section of exposed Roman wall stands at the western edge of Abbey Grounds, a public park formed from the medieval lands of the Augustinian Abbey of St Mary. The western edge of a bank has remained covered in earth, but the eastern edge has been excavated, revealing the original 3rd-century walls and short enclosures added some 50 years later. The enclosures, or chambers, are a bit of a mystery. They may have been used as animal pens, shrines, or prison cells.

The simplest way to find the Roman wall is to enter the Abbey Grounds park, behind the parish church of St John the Baptist. Take the signposted right path that leads across the southern edge of the Abbey Ground, cross a footbridge over the River Churn, and you will see the elongated earthen bank of the Roman wall directly ahead and to your right. You can climb on top of the wall and there is an information plaque explaining the history of the site.

The section of Roman wall is open at any time. Finds discovered on the wall and the nearby Verulamium Gate are on display at the Corinium Museum on Park Street. A short walk across the park brings you to the Norman Arch, a 12th-century gateway into the abbey estate. 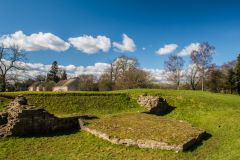 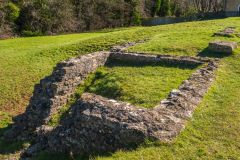