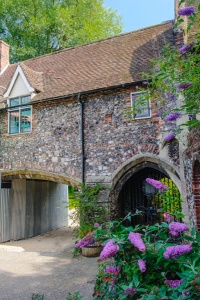 Pulls Ferry is the water gate for Norwich Cathedral. The attractive flint building we see today dates to the 15th century, but the channel running up to the Ferry is far older; in fact, it was built before the cathedral.

Heavy stone, much of it from France, was brought up the canal to the site. In addition to stone from Caen, timber from the Baltic came up the canal, along with iron from Sweden. It was not only building materials that came through the watergate; peat from the great East Anglian fens was brought here to be used as fuel in the priory kitchens. 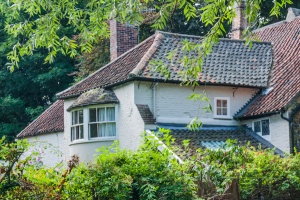 In the 15th century an arched gateway was built across the canal, and it is this gateway that is the most obvious historical feature of Pulls Ferry today. The gateway served to guard the approach to the cathedral, but it was not until the priory was dissolved by Henry VIII in the 16th century that the current Ferry House was built, incorporating the earlier gateway. The house was used as an inn, but also as a home for a ferryman carrying people across the Wensum.

The first ferryman was named Thomas Howes, or Holmes. The name 'Pulls' recalls John Pull, who became ferryman in 1796, and stayed in the post until his death in 1841. Apparently Pull got married the year after he took the post, to Ann Haywood, but his wife seems to have lived only a few years, dying in 1800.

The couple did have a son, John, in 1798, who was baptised at St John Timberhill. John Pull married again in January 1802, to Ann Steers. A child was born to the couple in June, which suggests that it was either very premature, or the marriage was one of necessity!

In any case, there were tragic consequences, for the child died only a week after being baptised. The Pulls went on to have five more children, only three of who survived childhood. Ann Pull the second died in 1837 at the age of 52, and her husband followed in 1841, aged 73.

John Pull continued to operate the Ferry House as a pub, though he was probably the last licensee to do so. As for the 12th-century canal, that was filled in around 1772, and the only reminder of it is the course of the modern slipway, which leads towards the medieval arch.

Pulls Ferry and Ferry House are privately owned. The only real reminder of the ancient history of the site is a small plaque at the top of the drive leading down to the ferry. There is a footpath along the river from Bishop Bridge, but perhaps the best view of the ferry is from the opposite side of the river, off Riverside Road. This view has been used in innumerable tourist brochures, so many that Pulls Ferry has become one of the 'signature' views of Norwich. 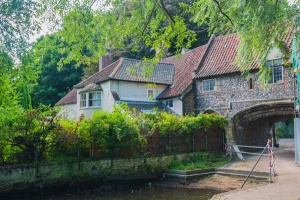 The slipway and gateway arch

More self catering near Pulls Ferry