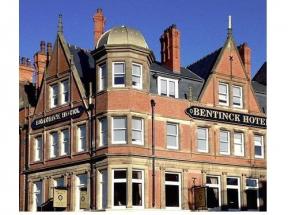 Welcome to the Bentinck Hotel: The Bentinck Hotel Bar and Brasserie is situated next to the Rail & Tram Stations in Nottingham City Centre. The Hotel was refurbished in 2013 and is under new management and owners.

Conveniently situated in the heart of Nottingham for attractions such as: Theatre Royal & Royal Concert Hall just 10 mins walk away Capital FM Arena National Ice Centre Holme Pierrepont National Watersports Centre for rowing canoeing whitewater rafting and waterskiing Nottingham University Sherwood Forest Nottingham Castle Nottingham Forest and Nottingham City football grounds Dog Racing at Colwick Horse racing at Nottingham Racecourse (Colwick Park) and at Southwell Racecourse Rolleston Nr Newark. All things Robin Hood and Merry men, Sheriff of Nottingham, and Maid Marion related! To learn more about local places of interest and Robin Hood please see the Attractions page. The hotel is an ideal base for both business and tourism because of it's proximity to Nottingham railway station and within easy reach of the city centre and attractions.

Dining Facilities
The Bentinck Hotel has a high quality bar and brasserie that is quickly becoming a popular place to eat and drink in Nottingham. We have an excellent menu and guests will enjoy the relaxed and stylish ambience. Browse our gallery below to find out more about what you can expect. We hope to see you soon.

Get an Ordnance Survey map covering the Nottingham area.

The Crown & Plough
Bed and Breakfast (12.2 miles away)

Caravelli
Restaurant with rooms (12.7 miles away)

King Alfred of Wessex, later to become known as Alfred the Great, defeated a Danish force led by Guthrum, at Eddington, in Wiltshire. Alfred was aided by men from Somerset, Hampshire, and Wiltshire. According to peace terms drawn up at Wedmore, Guthrum agreed to be baptised and withdraw his forces to the East, forming The Danelaw, where Danish rule held sway, while Alfred controlled the west of England.