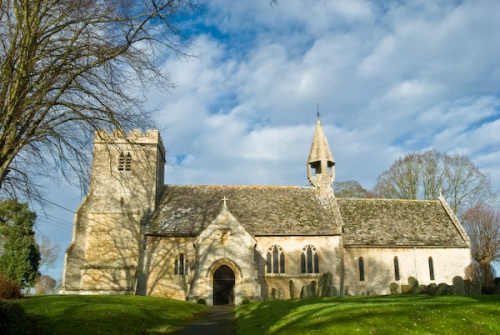 St Mary's church in Castle Eaton is located just a few yards from the River Thames. This attractive church has an unusual central bell turret. This is often presumed to be a Victorian addition, possibly the work of architect William Butterfield, but the church historical notes claim that it dates to the 13th century.

The rest of the church is more conventional in design, with a two-stage west tower, nave, north aisle, and chancel. in the churchyard are some interesting table tombs dating to the 18th century.

It seems clear that there was a Saxon church here, but the oldest parts of the current building date to the late Norman period - around 1170 AD. The north and south doors both date to this time.

Once you have gotten over the sight of the odd belfry, move on to the south door, where things get very interesting indeed. The door itself is late Norman, with an outer order of traditional chevron design. The door stops are carved as a pair of serpents, or dragons. The carving is delightful, of a pattern similar to the famous Saxon dragons at Deerhurst, Gloucestershire. Against the wall of the south porch is a medieval coffin lid carved with the shape of a knight in armour. 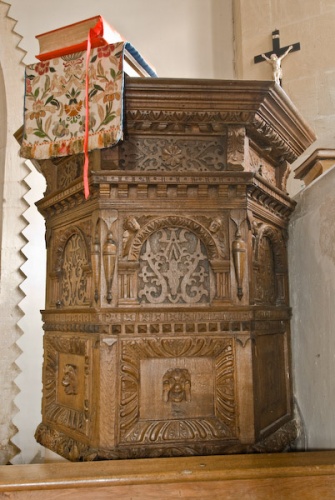 The most notable aspect of the church interior is the wonderful chancel arch. This is 13th century, with beautifully crisp and clean mouldings. Near the pulpit is a piscina which is probably 13th century.

The pulpit itself is worth mentioning; this is Elizabethan, though the base is more modern. about the lower part of the pulpit are beautifully carved sections of 15th-century panelling; these were probably part of a rood screen, and it seems likely that they were salvaged for the pulpit when a 1562 edict of Queen Elizabeth abolished such screens. Further sections of the screen panelling are to be found in the altar.

To the north of the chancel arch is a small section of preserved medieval wall painting depicting a Virgin and Child.

In the north chapel is a striking oak shield set upon a twisted shaft about 8 feet high. The shield bears a coat of arms and the date 1704. There is no indication of the origin of the shield, or what it represents, but it seems likely that the post upon which it stands originally supported the West Gallery.

The circular font presents an intriguing mystery. The most likely date is late 12th century, but the style is very similar to Saxon work, so it may be earlier. The bowl and the base were not made for each other but combined at some point in the past. The bowl is carved with lovely foliate scrolls, again similar in style to the Saxon period.