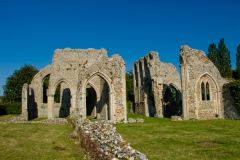 There are so many hidden heritage delights in Norfolk that its hard to choose only 5 for this list! Everywhere you look there are delicious ancient churches, castles, and stately homes (not to mention the beauty of the Norfolk Broads). After much pulling of hair and inner anguish, helped by several cups of morning coffee, here's a list of secret places in Norfolk that I've enjoyed visiting.

2. Baconsthorpe Castle - talk about hidden away! You have to be determined to get to Baconsthorpe, even though it is technically close to Holt and Sheringham. The castle is a beautiful example of a 15th-century moated manor house with later extensions by the Heydon family. The setting is so peaceful and secluded its an absolute treat.

3. Hales and Heckingham churches - I've included both these historic delights together, as they are only a few miles apart. Hales is one of the finest Norman churches in Norfolk, with superb early Norman carving around the door, a thatched nave and chancel. Heckingham is contemporary to Hales, and may have been crafted by the same masons. The church has a wonderfully carved south doorway, and a rounded apse, thatched, as at Hales.

4. Thetford - I cheated with this one and lumped the whole town of Thetford into one secret place. There's just so much history to see in a relatively compact area. There's Thetford Castle, the largest castle mound in England, the very extensive remains of Thetford Priory, the Ancient House Museum, the birthplace of Thomas Paine, Dad's Army Museum, and just 5 miles away is Grimes Graves prehistoric mine.

5. Binham Priory - One of the earliest Norman abbeys in England, Binham boasts probably the first example in England of bar tracery. There are extensive foundations of the abbey, but perhaps the most interesting part of Binham is the existing parish church, which originally formed part of the abbey church. The remains of a medieval market cross stand in the village centre.