A Visit to Tarrant Crawford Church 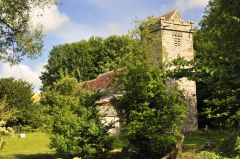 This delightfully situated little 12th and 13th century church stands well apart from the hamlet of Tarrant Crawford, up a private lane. The site is close to the spot where the 12th century Cistercian nunnery of Tarrant stood before it was destroyed in the Reformation. The abbey was established by a local landowner named Ralph de Kahaines (Kahaynes), and refounded in 1228 by Bishop Poore of Salisbury, who was born at Tarrant Crawford. The neighbouring farm is still named Tarrant Abbey, and possesses an ancient medieval barn that may have been an abbey building. Part of the farmhouse may have been the abbey guesthouse.
Medieval wall Paintings
There are two main features of historic interest in this lovely little church. The first is a wonderful series of 14th century wall paintings. Almost the entire south wall is filled with a series illustrating the story of St Margaret of Antioch. The paintings are on two tiers, divided into 14 panels, much like a modern cartoon. The upper sections are much the better preserved, and have been called the best surviving paintings of the St Margaret story.

The paintings show the tale of St Margaret's life and death, through her refusal of the advances of Provost Olybrius, to her imprisonment and subsequent series of horrible punishments, to her eventual heavenly bliss. Its an extraordinary sequence of artwork, and it is rare to see such a huge expanse of surviving medieval painting so well preserved. The lower tier of paintings depicts a morality tale of the Three Kings and the Three Dead. The church guide book gives full details of each panel.

The Mystery of the Coffin Lids
The second historically intriguing feature of St Mary's church is in the sanctuary. On either side of the altar is a worn coffin lid. Both of these coffin lids were said to have been found on the site of the former abbbey church. That on the north side bears a foliated cross. This has traditionally suggested that it comes from the tomb of Bishop Richard Poore, the man who built Salisbury Cathedral. When Bishop Poore knew that his death was near, he returned to his birthplace, and died at the abbey he had refounded only a few years previously. 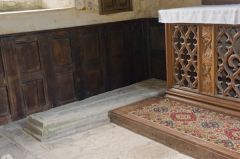 The other, plain grave slab, has also been traditionally identified witrh the grave of a famous person, in this case Queen Joan of Scotland, daughter of King John and sister of Henry III, who served as a lay abbess of Crawford and died here in 1238, only a year after Bishop Poore.

Now, the identification of both coffin lids is tenuous, to say the least, and may be based on no more than wishful thinking. The Churches Conservation Trust, who look after St Mary's, state clearly that the coffins are likely not associated with Bishop Poore and Queen Joan.

As for the rest of the church, it features a 16th century wagon roof over the nave. There are 17th and 18th century pews, and a very nice carved priest's stall of the Jacobean period. A few medieval tiles have been reset before the altar, and there is a 12th century piscina in the chancel. There is a small area of 13th century wall painting in the chancel, and a depiction of the Annunciation on the south wall.

The combination of the secluded setting and the wonderful wall paintings makes a visit to Tarrant Crawford church an experience not quickly forgotten.