Here are a few photos from a recent visit to St Peter's church in Rendcomb. The church is located directly beside the manor house, which has become a school. The chief interest at Rendcomb is the fabulous 12th century font.

St Peter's church. The cross in the foreground is of recent origin but the base of the cross may date to the 8th century

The glory of Rendcomb is the 12th century font.

There are 12 carved figures around the circular font bowl, each showing the distinctive sign of one of the apostles

The detail of the carvings is exquisite, and in an excellent state of repair.

More of the font carvings. A similar font is located in Hereford Cathedral

One intriguing apostle figure on the font is blank, save for the feet. This is likely a portrayal of Judas

Photos are available for use in publishing or other image licensing, please contact Britain Express image library

All images are © David Ross

This delightful 17th century Grade II listed Cotswold stone cottage has been renovated to a very high standard and has a beautiful garden. Located in the picturesque village of Stanton, …
Sleeps 4 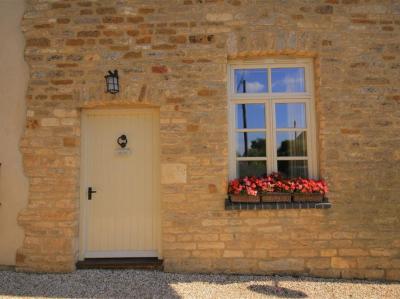 This romantic country cottage is in the heart of Bledington, Gloucestershire and can sleep two people in one bedroom.
Sleeps 2