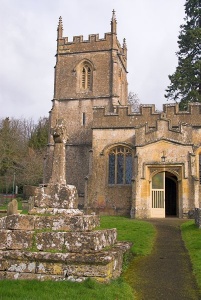 Rendcomb is an attractive village located just off the A435 between Cheltenham and Cirencester. The manor house of Rendcomb is now a school, and jostling up against the school property is the small parish church of St Peter.

The church exterior is attractive but unremarkable, composed of a square west tower and battlemented nave, with a south porch. The church dates to the 12th century, but much of what we see today dates to a comprehensive rebuilding in 1517.

In front of the porch is a cross upon a high, multi-layered pedestal. The cross itself is of recent vintage, but the base is much older. It is thought that the base stands on the site of an original shrine dating to around the 8th century. Moving into the south porch, the wooden doors date to the 1517 rebuilding.

In the interior the first sight that meets your eye is an extraordinary one; a rounded 12th-century font covered in superbly detailed carvings. The font is generally acknowledged as of the finest Norman works in the country. It was created between 1130 and 1140 and features likenesses of 12 apostles. 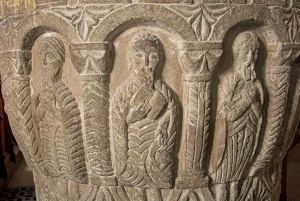 Eleven of the apostles are identifiable by their unique insignia. The twelfth apostle likeness is blank, with only a pair of feet showing. This is probably meant to depict Judas. A similar font can be found in Hereford Cathedral. See our photo gallery for some detailed images of the font carvings.

The north wall of the nave was rebuilt in the 16th century but there are still 3 Norman pillars preserved in the fabric of the wall. The striking rood screen looks medieval, and in a sense, it is. In the Victorian period the 15th century screen was rebuilt, and reassembled using the original wood, with cast-iron used to reinforce the older material.

In the chancel is a fanciful scrolled Baroque memorial to a young daughter of the Berkeley family who died, aged only 18. The altar rails are 16th century, but they, too have been reconstructed in Victorian times.

If you have the time, take a wander around the village of Rendcomb. It is an attractive place, somewhat overshadowed by the presence of Rendcomb school, which used to be the manor house. Some of the manor buildings are quite attractive, such as the stable block, on the road through the village.

More self catering near Rendcomb

More bed and breakfasts near Rendcomb