The Vicar of Bray - history and song lyrics 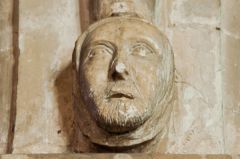 The Vicar of Bray has become a cultural byword for political expediency, hypocrisy, and insincerity. But what is the origin of the story?

Lyrics to a song entitled The Vicar of Bray first surfaced in the 18th century, though the score that traditionally accompanies the lyrics actually dates to the 17th century. The song tells the story of a clergyman who eagerly changed his views with every shift in the politial and religious climate, in order to maintain his position. The 'Bray' in the title is most probably the village of Bray, Berkshire, on the south bank of the Thames immediately east of Maidenhead, and the church of St Michael, Bray was the living which the vicar was so keen to hang onto.

The song starts with the Restoration of the monarchy and has the main character changing his views with every change of monarch through to the Hanoverian George I.
The Vicar of Bray - Lyrics

1. In good King Charles' golden time, when loyalty no harm meant,
A zealous high churchman was I, and so I gained preferment.
To teach my flock, I never missed: Kings are by God appointed
And damned are those who dare resist or touch the Lord's annointed.

And this be law, that I'll maintain until my dying day, sir
That whatsoever king may reign, Still I'll be the Vicar of Bray, sir.

2. When royal James possessed the crown, and popery came in fashion,
The penal laws I hooted down, and read the Declaration.
The Church of Rome, I found, did fit full well my constitution
And I had been a Jesuit, but for the Revolution.

3. When William was our King declared, to ease the nation's grievance,
With this new wind about I steered, and swore to him allegiance.
Old principles I did revoke; Set conscience at a distance,
Passive obedience was a joke, a jest was non-resistance.

4. When Royal Anne became our queen, the Church of England's glory,
Another face of things was seen, and I became a Tory.
Occasional conformists base; I blamed their moderation;
And thought the Church in danger was from such prevarication.

5. When George in pudding time came o'er, and moderate men looked big, sir
My principles I changed once more, and I became a Whig, sir.
And thus preferment I procured From our new Faith's Defender,
And almost every day abjured the Pope and the Pretender.

6. The illustrious house of Hanover and Protestant succession
To these I do allegiance swear -- while they can hold possession.
For in my faith and loyalty I never more will falter,
And George my lawful king shall be -- until the times do alter.

Who was the Vicar of Bray?
Though the lyrics of the song refer to events from the Restoration onwards, one theory suggests that the actual Vicar of Bray referred to in the song lived during the turbulent period of the English Reformation, and his religious vacillations took place during the reign of Henry VIII (Catholic, then Protestant), Edward VI (Protestant), Mary I (Catholic), and Elizabeth I (Protestant). The 16th century name most often associated with the Vicar of Bray is Simon Aleyn, who served Bray from 1557-1565, which would have spanned the reigns of Mary and Elizabeth. However, since the song actually refers to events at least a century later, we can't be sure that Aleyn is our man. The closest 17th century candidate is Francis Carswell, who was vicar from 1665-1709, which would cover the reigns of Charles II through to George I. But suince the name of the vicar is nowhere mentioned, we can't be sure that it was Carswell. Traditionally the Vicar of Bray is said to be buried beneath the central aisle of the church nave.

Notes:
The Vicar of Bray story was made into a film starring  Stanley Holloway in 1937. The film rather oddly moves Bray to County Wicklow in Ireland and changes time periods to the English Civil War era. The character of the vicar is given a positive spin; he protects his parishioners and secures them a pardon from Charles II after the Restoration of the monarchy. Not quite in keeping with the original lyrics, you must admit, but it made for a good script!