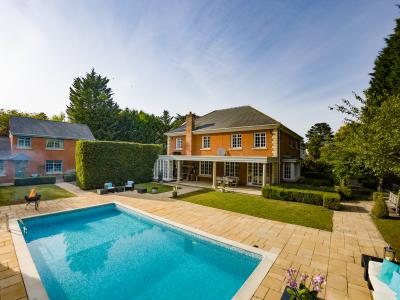 This mansion house rests in Sunningdale, Berkshire and can sleep fifteen people in seven bedrooms.

Gleneagles is a fabulous mansion house rests in the charming village of Sunningdale in Berkshire. Hosting seven bedrooms; a super-king-size, a king-size with en-suite bathroom, a ground-floor king-size with en-suite shower room, another ground-floor king-size, a single and a twin, along with an annex with double bedroom and sofa bed, all altogether sleeping up to fifteen guests. A large bathroom serves these rooms as well as a cloakroom.

There is also a kitchen/diner, utility, a dining room, a sitting room, and a reception hall. To the outside there is ample off-road parking on the private gated driveway, and a large enclosed garden with lawn, patio with seating, an outdoor shower and an outdoor heated swimming pool. Gleneagles is an incredible property resting within a beautiful village for a large family holiday in Berkshire.

Details
Gas central heating
Electric double oven, induction hob, dishwasher, fridge/freezer, microwave, washing machine, tumble dryer
Large TV and WiFi
Fuel and power inc in rent
Bed linen and towels inc in rent
Travel Cot and highchair available on request only
Garage parking for 2 cars and parking for four cars next to the garage
Large enclosed garden with lawn, patio with seating, outdoor shower and outdoor private heated swimming pool all year round
Sorry, no pets and no smoking
Shop within less than 2 miles, pub with less than 1 miles
Note: Facilities in the annex - Gas central heating
Electric oven and gas hob, fridge, freezer, TV, WiFi
Note: There is a Good Housekeeping Bond of £800 for this property
Note: The pool is open all year round
Note: the pool is unprotected, please ensure children are supervised at all times
Note: Due to close neighbours please refrain from playing loud music after 11pm
Note: Three nights minimum booking
Note: This property is suitable for families only and isn't suitable for stag/hen parties, or similar
Please note: The number of people occupying this property should not exceed the number stated on your booking
If you wish to invite additional guests, this must be agreed by the owner in advance
Please Note: This property is within 5 mins walk of the exclusive Sunningdale golf course, and 2 golf buggies are available if required

Get an Ordnance Survey map covering the Sunningdale area.