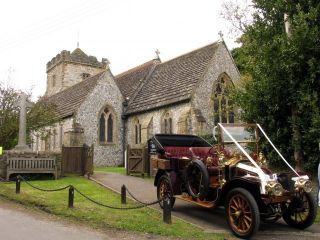 Washington
A small, attractive village at the foot of the South Downs, near Steyning. Above the village stands Chanctonbury Ring, site of an Iron Age hill fort. The long-distance South Downs Way runs through Washington, and the village is a popular centre for walks in the area.

The village dates to at least the 10th century, when Washington was granted to Ethelwold by King Edred. It was later in royal hands and was granted by King Harold to his brother Gurth.

There are a number of historic buildings in Washington, with over 40 awarded Grade II listed status. The church of St Mary was built by Philip de Braose around 1070 and was later granted to the abbot of Sele priory. Eventually, the manor ended up in the hands of Magdalene College, Oxford.

There are some fine memorials in the church, including the alabaster tomb of John Byne, showing him kneeling in prayer with his wife and seven children.

The local pub, The Frankland Arms, may be named for inventor William Frankland, who lived at Muntham Court for many years.

More self catering near Washington >>

More bed and breakfasts near Washington >>