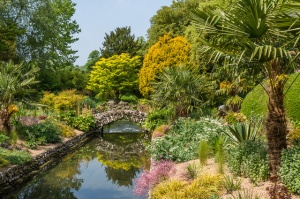 The gardens at West Dean are set in the rolling hills of the South Downs, near Chichester, and surround a historic manor house, built in 1622.

This restored Victorian kitchen garden boasts a huge collection of both exotic and traditional British plants. Many of the species grown are donated by gardens around the world or from seeds obtained from the Heritage Seed Library.

Seasonal blooming plants provide a riot of colour throughout the year. The path through this area of the garden is so heavy with yellow, orange, and red blossoms during the summer months that it has become known as the "Hot Border".

A wide variety of fruit trees, among them pear, apple, and plums, adorn this walled area. Many of the trees are trained in unusual shapes, like a goblet, chalice, or dome shape, as might have been found in an Edwardian garden of this type. 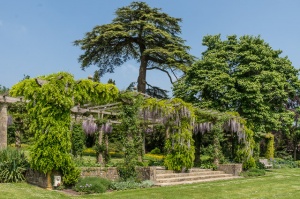 A total of 16 glasshouses and glass frames provide a home for a very wide variety of tender and exotic plants, such as orchids, strawberry plants, figs, nectarines and peaches.

A rustic summerhouse, lovingly restored with moss walls, seaweed decorations, a heather ceiling and a thatched roof, punctuates the restored Spring Garden. Nearby is a tunnel of Laburnum and ivy.

Home to clematis, roses, and honeysuckle varieties, the pergola is over 100 metres long and features an unusual gazebo at the west end. The floor of the gazebo is composed of knapped flint combined with horse's molars!

Near the pergola is the peaceful Sunken Garden. Other features of note at West Dean include an extensive arboretum and a vast planting of bulbs (over 30,000 Narcissi, Scilla, Lilies, Anenome, Muscari, Allium, Chinodoxia, Fritillaria, Crocus and Cyclamen). West Dean is also home to the National Collections of Tulip Trees and Horse Chestnut Trees.

West Dean Gardens have been the recipient of numerous national and regional awards, among them the Historic Houses Association/Christie's Garden of the Year. In addition, the English Tourism Council has accredited West Dean as a 'Quality Assured Visitor Attraction'.