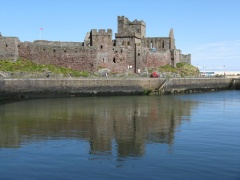 Do not make the mistake of calling the Isle of Man part of England; nothing annoys a Manx native more! The Isle enjoys a unique status in the UK; it has its own parliament and its own tax laws. Or to be more precise, its own lack of tax laws, for it is the Isle of Man's loose interpretation of taxation that makes it a haven for British investors anxious to avoid the high taxes imposed on the mainland.

The island is roughly 33 miles long and ten miles wide, and most of those miles is given over to a high plateau split by deep river canyons. The coast is beautiful in a rough, craggy way, but this is not the place to come for a relaxing beachfront holiday.

On the other hand, if you are a motorcycle fancier, the Isle of Man is Mecca; each year in May and June the island's population of 70,000 is swollen by the arrival of 45,000 motorcycling fanatics, as the series of races known as the Tourist Trophy (TT) take over.

The capital of Douglas was a popular Victorian seaside destination, though it has seen better days. The Manx Museum in Douglas explores the island's past and present, including the ever-present TT. If you aren't inspired by two wheels, take your own two feet out on a part of the 90 mile long Road of the Gull, a walking path which follows the coastline around the entire island. 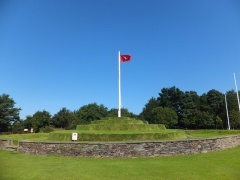 Castle Rushen, in Castletown, is a 13th-century fortress that was home to the medieval kings and lords of Man. More popular still is Peel Castle, whose sandstone defences enclose the remains of 13th century St. German's Cathedral. Remains of early Viking presence at Peel are now to be seen in the Manx Museum. Nearby the castle is Tynwald Hill, where the independent Manx parliament, the Tynwald, gathers every July 5.

The delightful Manx Electric Railway is a Victorian tramway running from Douglas to Ramsey via Laxey, providing spectacular coastal views. It is the longest authentic narrow-gauge railway in Britain, at almost 18 miles in length, and boasts the oldest tramcars in the world still in regular operation.

The Cregneash Village Folk Museum provides a look at life on the Isle in days gone by, with displays of a traditional croft and fishing community, thatched cottages, and a working farm. Just beyond Cragneash is the small isle called Calf of Man, now a bird sanctuary. Regular cruises in summer take visitors to the island. Inland is the Chapel Hill Iron Age hillfort, scene of a fascinating Viking ship burial.

The Isle of Man Department of Tourism and Leisure is quick to point out that the island offers fine golfing, with 8 courses, and a variety of good fishing opportunities from stocked streams and reservoirs to swiftly running rivers.

photo of Peel Castle is © Dave Pickersgill, republished with gratitude under a Creative Commons license 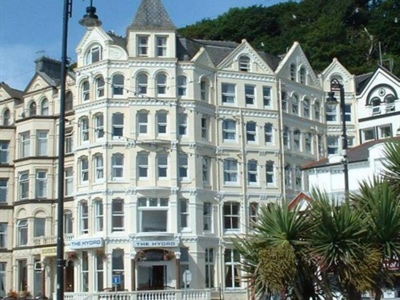 The Hydro is a well established Isle of Man hotel situated on the beautiful Queens Promenade. Built in 1910 this 56 bedroom hotel offers modern facilities whilst retaining much of it's original charm. more >>

More hotels in Isle of Man >>