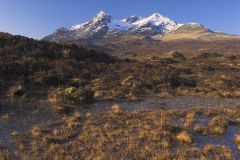 I wasn't aware until today that the unique natural grandeur and remarkable geology of the north-west Highlands of Scotland has been recognized by the area being named a UNESCO Geopark, the first such area in Scotland to be recognized.


The concept of a Geopark is a fairly new one, so new that I doubt most casual tourist would have more than a vague idea of what it means. Geoparks are designated by the United Nations, through UNESCO, as a means to preserve areas around the world which are "defined by their outstanding geological features, forward-thinking local communities and unique natural and cultural heritage."

Which is perhaps a long-winded way of saying that a Geopark is a special place; special in its geologic formation, uniqueness, and natural beauty. A place worth recognizing and protecting for future generations.

The Northwest Scotland Geopark stretches across the northern mainland of Scotland, taking in north-west Sutherland and Wester Ross. The major villages in the area are Achiltibuie, Lochinver, Kinlochbervie, Scourie and Durness. This area is the least densely populated region in all of Europe, a place where the natural beauty of the land, and the fabulous wildlife, take centre stage, and humans are little more than an afterthought.


The area encompasses around 2000 square kilometres, including mountain, peatland, beaches, forest and coastline. At the core of the region is the Moine Thrust Zone, which runs from north to south through the Highlands.


Don't get the idea that a Geopark is a place where nothing happens. The great thing is that visitors can enjoy the splendid, remote countryside through a range of activities, including walking, climbing, fishing, archaeology, geology, and more active sports like waterskiing and other watersports.

You can participate in guided walks and activities under the leadership of Park rangers, and enjoy special activity programmes in the spring and autumn.

I think the concept of a Geopark is a pretty interesting one, and I hope that more unique areas like the Highlands of north-west Scotland can be designated as parks for visitors to enjoy. Certainly, if you prefer to holiday off-the-beaten-track, the Geopark makes an attractive option. Other current geoparks in the UK include: