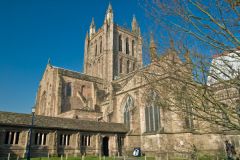 The Three Choirs Festival is one of the most historic music pageants in Britain. The festival is held in turn by the cathedral cities of Hereford, Worcester, and Gloucester. This year it is the turn of Hereford to host the event, which features the cathedral choirs of each city, in addition to international musical performers.

The Three Choirs Festival presents a week-long programme of choral and orchestral music. The first festival was held sometime prior to 1719 (records are a bit vague, but we know it was in existence by that date).  The original festivals were instigated by music societies in the three cities, who began a triennial rota of gatherings, which initially lasted for two days.

Those early music meetings were timed to be held after the crops were harvested, in late August or early September, and were initially largely social occasions. In 1724 Thomas Bisse, chancellor of Hereford Cathedral, proposed that the festival be used to raise money for charity, and this tradition has been upheld ever since.

The work performed most often since the Festival originated has been Handel's Messiah. It was first performed in 1759, one year after the composer's death, and then every year until 1963 (and frequently since that time).

The highlight of the Three Choirs Festival is the evening performances in the cathedral itself. In addition, there are daytime performances ranging from chamber music to opera, theatre to organ recitals, talks, exhibitions and a variety of other events on a musical theme.

The 2009 festival takes place during the week of 8-15 August. Tickets can be booked online (see the festival website link below).