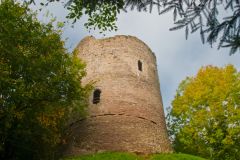 Wales is ready for a huge free celebration of architecture and cultural heritage this September. A record number of historic sites, either usually closed to the public or which normally charge for admission, will open their doors for free at certain times during September for Open Doors - European Heritage Days.

Open Doors is an annual celebration of history, architecture and culture co-ordinated by the Civic Trust for Wales with the support of Cadw. Among the many, many sites involved are the following:

Hafoty is a timber-framed medieval house later encased in stone. Hafoty is a remote site and access is via a farm track off an unclassified road between Llansadwrn and Llandona. Temporary signage will be in place. Limited parking is available but there are no toilets at the site. Open 12-4pm on August 16, 23, 30 and every weekend of September (5 & 6, 12 & 13, 19 & 20 September) from 12pm to 4pm.

Barclodiad y Gawres is a Neolithic burial chamber near Aberffraw on the Anglesey. The tomb is known for its decorated stones.  The interior of the monument will open to visitors every weekend until the end of October. There are guided tours on Saturday 5 September (between 10.30am and 1.30pm) and on Sunday 6 September (between 12pm and 4pm).

Rhuddlan Castle offers free entry and guided tours on Saturday 5 & Sunday 6 September, 10am-5pm. Rhuddlan was one of the castles built by Edward I during his late 13th-century conquest of Wales.

Porth Mawr, also known as Exchequer Gate, was the main medieval entrance into Caernarfon. Conservation work on the gatehouse has meant that it has been closed to the public for some time, but Open Days offer a rare opportunity to go inside the gatehouse. Porth Mawr is open from 10am to 4pm on 12th & 13th September.

Cilgerran Castle, one of Wales’ most scenic castles, is set on top of a wooded gorge in the Teifi valley. There is free admission on Saturday 12 September. Explore this striking 13th-century castle, which has been painted by numerous artists over the centuries.

Denbigh Castle, begun by Henry de Lacy in 1282. The castle stands high above Denbigh and boasts an unusual triple-towered gatehouse. Free entry on the weekend of 12th and 13th of September, 10am-5pm.

Valle Crucis Abbey, one of the most complete Cistercian Abbeys in Wales, will be offering free entry and free guided tours over the weekend of 19th and 20th of September, 10am-5pm. The Abbey was an ideal location for the Cistercians, medieval monks, who deliberately sought out wild and lonely places.

Bronllys Castle is a late eleventh-century motte just outside Talgarth, near Brecon. Tour the castle as part of the Talgarth Festival on 29-30 August. Tours can be booked at the Cadw stand on the festival site.

For the full list of participating sites (with opening dates and times) and updates on the Open Doors 2009 programme, go to the Civic Trust for Wales website on www.civictrustwales.org