The Making of Wales 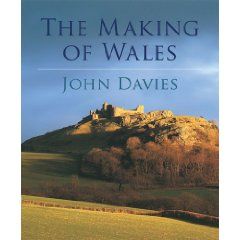 A classic book about Welsh history and heritage is making a comeback. The Making of Wales, by Dr John Davies, was first written 25 years ago. Now a revised and fully updated 2nd edition has been launched, with a new chapter added by Dr Davies, covering the past 25 years.

The book is being (re)launched as part of the 25th anniversary of Cadw, the organization charged with preserving and maintaining Welsh culture and caring for historic sites in Wales.

The completely revised 2nd edition looks like a real winner. The book charts the changing face of the Welsh landscape from prehistoric times up to the present day. Its a hefty volume, with 224 pages, and it is illustrated with lovely full-colour photographs, line drawings, and maps. Dr Davies pays particular attention to the role played by the prehistoric men and women who shaped the landscape with primitive tools like axes, spades and trowels. "We can name hardly any of them. Yet they are commemorated for the landscape itself is their memorial."

The first edition of the book came out in 1996. Welsh Heritage Minister Alun Ffred Jones paid tribute to Dr Davies, calling him “a fountain of knowledge on Welsh history and his updating of The Making of Wales is a masterpiece.”

Resources:
The Making of Wales on Amazon.co.uk (£20 hardback)
Cadw on Britain Express

Welcome to The Sir William Fox Hotel a jewel in the heart of South Tyneside. The hotel is a beautiful listed building set in the picturesque and historic village of Westoe in the heart of … more >>