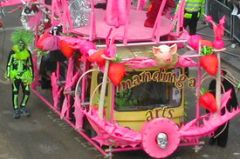 The traditional ceremony welcoming the new Lord Mayor of London is set to take place on Saturday, 14 November. The ceremony will mark the 820th anniversary of the event, and will be marked by a three-mile parade featuring over 1550 servicemen and women, and over 6000 participants in all.

The Lord Mayor's Show will begin at Mansion House at 11:00 with an aircraft flypast. The parade will then proceed through the streets of the City, passing by many of London's top visitor attractions, including St Paul's Cathedral, where the new Lord Mayor will receive a blessing at 12:10.

The parade will proceed to the Royal Courts of Justice, arriving at 12:30. There the Lord Mayor will swear an oath of allegiance to the Queen, in a traditional ceremony that has not changed in substance since Dick Whittington swore the same oath in 1397.

At 13:00 the parade returns to Mansion House, arriving there at 14:30. Following this, there will be a firework display, beginning at 17:00, based on a barge anchored between Blackfriars and Waterloo bridges.

The Lord Mayor's Show is always a colourful event, and there will undoubtedly be lots of spectators, so you would be wise to arrive early at a convenient site along the parade route.

NB. Photo by Peter Beaven and licensed for reuse under the Creative Commons Licence.

***UNDER NEW MANAGEMENT AS OF MAY 2017*** The Bell Inn Rickinghall is located in a peaceful village setting overlooking the surrounding countryside. The Bell Inn is owned by two local Ladies; Lindsey Booty & Jordan … more >>