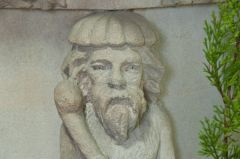 One of the most fascinating parts of exploring old historic churches is discovering the pagan symbols that became integrated into medieval Christian symbology. One of the most familiar of these is the 'Green Man', which was a form of pre-Christian fertility symbol. Green Men show up in large and small churches across England, and are often used as decoration on roof bosses, and sometimes on fonts (not to mention as names for more than a few local pubs!).

One of the discoveries I made on a recent two-week jaunt through Suffolk is an East Anglian variant on the Green Man, called the woodwose. Green man depictions usually show only a face half-hidden in leaves, with vines coming out of its mouth. Woodwoses, on the other hand, are generally represented as a full, part-human figure, often carrying a club. The limbs of the woodwose are leafy, and he usually wears a cap and a thick beard.

One of the fascinating aspects of the woodwose is that he is shown with the club in different positions; often it is upraised, sometimes it is by his side. One theory is that the upraised club shows the wild man before his conversion to Christianity, while after conversion the club is lowered. That's the 'official' Christian position, but in popular medieval culture, it seems more likely that the woodwose was used to ward off evil spirits.

I lost count of the number of woodwoses I found on fonts throughout Suffolk, but there are occasional woodwose carvings above the church entry (Peasemhall is an example). Sometimes there are four woodwoses on a font base, sometimes only two, on opposite sides, alternating with figures of angels. One of the figures on the font at Halesworth holds a cap over his private parts.

Some of the best-preserved woodwose carvings can be found in the churches at Chedington, Framingham, Orford, Saxmundham, and Stradbroke. Over the coming weeks, I'll be writing about each of the above churches and uploading lots of photos. 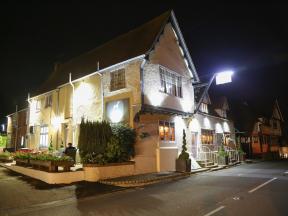 The Dog at Wingham
Wingham, Kent