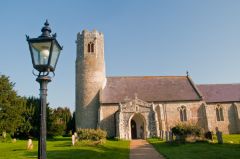 I just finished posting about the Monumental Brass Society when I realized there was another interesting organization I had just run across. This time its the Round Tower Churches Society, an organization devoted to, well, churches with round towers! There are about 180 round tower churches surviving in Britain today. Of these, 120 are in Norfolk, and another 42 in Suffolk. Only 5 are outside East Anglia (3 in Sussex and 2 in Berkshire).

The RTCS was founded in 1973 by WJ Goode as a registered charity. The aim of the Society is to preserve and investigate the history of churches with round towers.

Why study round churches? Well, for a start, round tower churches are among the earliest buildings still in regular use in England. Many were built in the late Saxon period, and a good many others in the early Norman period. As such, they tend to represent a fascinating period of historic architecture.

The Society makes grants to churches in need of repairs and publishes a quarterly magazine for members. Society members also give illustrated talks about round tower churches and will visit local groups to do so. There are regular guided tours as well, and the Society has its records at the Suffolk County Library archives in Lowestoft for anyone to investigate. The Society publishes several guidebooks covering round tower churches in East Anglia. On the Society website, they also maintain a 'Top 20' list of churches with special features.

As of this writing, membership is a very reasonable £10 annual fee (£15 overseas).