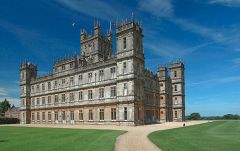 Fans of the latest ITV drama series, Downton Abbey, may have wondered what the lovely house in the series is in real life. Now the secret is out; it is Highclere Castle, near Newbury, Berkshire. If you haven't yet managed to catch an episode, Downton Abbey is a costume drama, now airing on Sundays at 9pm on ITV1. The series is set in an Edwardian country house in 1912 and depicts the lives and loves of the Crawley family and the servants who work for them. Among prominent castmembers are Dame Maggie Smith and Hugh Bonneville.

Highclere Castle has been the home of the Carnarvon family since 1679, and is built on the foundations of a house mentioned in the Domesday Book. The current Castle was built in 1842 by Sir Charles Barry, the architect who was largely responsible for the Houses of Parliament in Westminster.

The Castle has a strong connection with ancient Egypt, as the 5th Earl was one of the major sponsors of Howard Carter, and helped uncover the tomb of Tutankhamun in the Valley of the Kings in 1922. The Castle is home to an exhibition that commemorates this historic event, and some rare antiquities from the 5th Earl's earlier Egyptian excavations are on show to visitors.

The Castle is currently closed until Easter 2011, however there is a Christmas Shopping Fair on Tuesday 7 & Wednesday 8 December and also pre-booked groups can tour the property by special arrangement. All the public footpaths throughout the Estate remain open. For enquiries, please telephone the Castle Office on 01635 253210.

When the castle reopens in spring, keep in mind that the house is a member of the HHA (Historic Houses Association) so members of the HHA will receive free admission.

Photo is credit Mike Searle, licensed for reuse under the Creative Commons Licence