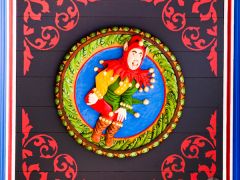 Some of Scotland’s most unusual and unique works of art are back home in Stirling Palace. A series of 16th century carved heads, crafted for King James V of Scotland, and measuring up to a metre across, are going on public display. Even more interesting, full-sized replicas of the heads have been recreated and will once more adorn the ceiling of James's royal palace.

Background
The carved heads were crafted around 1538-42, and most were made to adorn the ceiling of the King's Inner Hall, part of James V of Scotland's impressive royal palace at Stirling Castle. The ceiling was dismantled in 1777. Some of the heads were destroyed, and others were dispersed throughout Scotland and England. A couple ended up at Dunstaffnage Castle near Oban.

Thirty-four of the 'Stirling Heads' survived more or less intact. The largest of the roundels is a metre across. They are carved from oak and are up to 7.6 cm thick, weighing about 40kg apiece.

Careful replicas of the heads have been crafted and serve as the focal point for a fully recreated 16th-century ceiling in the King's Inner Hall. The heads are carved with a range of classical figures like Julius Caesar, and Scottish nobles including James himself, Mary of Guise, his queen, and Henry VIII of England. The heads - and the hall - were recreated by Historic Scotland at a cost of over £12 million, and are due to go on display to the public when Stirling Castle reopens to visitors in June 2011.

As Peter Buchanan, Stirling Castle Palace Project Manager, rightly commented, 'The original ceiling was a masterpiece of Scottish Renaissance art and craftsmanship', and the recreation is designed to showcase that craftsmanship to modern visitors. The Stirling Heads were hand-carved by master craftsmen John Donaldson, and painted by a team of conservation experts headed by Graciela Ainsworth. It took four painters roughly three months to complete the heads, using materials and techniques as close as possible to those of the 16th century.

Why were the Stirling Heads Created?
Like any monarch of substance in the 16th century, King James wanted to impress his visitors. The carved heads were only part of this urge to create an impression that he was a king of substance. James commissioned the heads as part of the scheme to build a new palace to celebrate his marriage to Mary of Guise. We do not know if he ever saw the finished ceiling, as he died in 1542, just as the building was being finished, leaving behind Mary of Guise and their new baby girl, just a week old, a baby known to history as Mary, Queen of Scots.

The original Stirling Heads will be on display in a special exhibition area on the upper floor of the royal palace. The exhibition area will be the centrepiece of a new gallery showcasing the life and arts in mid-16th century Scotland.

The Crown House has a history of hospitality dating back to its origins as one of the early coaching Inns on the original London to Newmarket road. The main building dates back to early Tudor … more >>