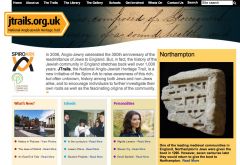 When I travelled to Lincoln a few years ago I ran into several medieval buildings related to a strong Jewish presence in the city. As a historian by training, I was peripherally aware that the Jews had been expelled from England by Edward I in 1290 - in part so that he wouldn't have to repay loans to Jewish financiers. But I knew next to nothing of Jewish history in Britain either before or after that time.

So it was with great interest that I ran into a fascinating new website called JTrails.org.uk. JTrails is a project of the Spiro Ark organisation, supported by Oxford Heritage Projects and English Heritage. They are creating a National Anglo-Jewish Heritage Trail, tracing the history of Jews in England through the centuries.

The Trails project was initiated to coincide with the 350th anniversary of the re-admission of Jews to England. As I browsed around the website, I was frankly amazed at how much information it contained. This is a wonderful historical resource for anyone with an interest in British history, Jewish or otherwise! There are town trails for areas where Jews had an especially strong presence.

As of today, these Trails include:

There are currently guides trained for Lincoln, and guides are being trained for Oxford as I write this. There are free downloads of historical materials, and printed guidebooks to several cities including Bradford, Northampton, and Oxford.

JTrails is a wonderful historical resource, and well worth a browse.