Llangollen, clustered around the River Dee, nestled in the Vale of Llangollen, and surrounded by hills is as scenic as it gets. 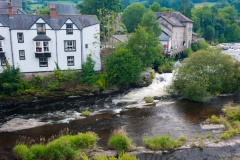 Llangollen and its river
It is best known today as the home of the Llangollen International Musical Eisteddfod. For one week in July this village comes alive with dancers, singers, choirs and musicians from all over the world and the village of 3000 people swells to 120,000 as cultural competitions and celebrations dominate the scene.

The village takes its name from Sain Collen who founded it in the 7th century. Two hundred years ago it consisted mainly of a green and a street joined by one of the "Seven Wonders of Wales", a four arched bridge, built in the 16th century on parts of a 13th century one. The river rushes through the village making the bridge a favourite place to stand and contemplate the beauties of the area while listening to the water roaring past. 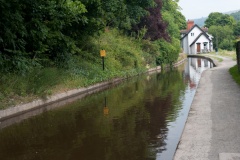 Llangollen Canal
Visitors are spoiled for choice as a 7 ½ mile steam rail journey along the Dee Valley and past Horseshoe Falls provides a scenic trip in another direction.

Another favourite ride is aboard a horse drawn canal boat at the village wharf, location of the Canal Museum. This trip on a branch line of the Shropshire Union Canal provides a relaxing contemplation of the green hills and valleys as it follows the Vale of Llangollen. The famous Pontcysylite Aqueduct, supported by four iron arches, stands 121 feet in the sky above the River Dee dazzling the eye as boats seem to sail through the air. Built to carry traffic from the northern rim of the valley to the far side, this cast-iron trough is the longest and highest in Britain. A black and white timbered house, Plas Newydd, the home of two eccentric Irish ladies, known as the Ladies of Llangollen, sits high on a hill looking over the village.

Hill climbers might almost believe the crumbling ruins of the medieval Castell Dinas Bran, perched on another hilltop high above the town, were designed with a challenge in mind. Breathtaking views are the reward for the steep 750-foot climb. The 13th century castle, named for a Celtic god, is partly surrounded by the remnants of an Iron Age hill-fort and ditch. In the 18th century its status grew when it was considered a "romantic ruin", and it became the most famous landmark in the Vale.

A stone's throw from Llangollen, in a setting both romantic and stunning, the Gothic stone ruins of 13th century Valle Crucis Abbey beckon. This Cistercian abbey, founded by a Welsh prince, boasts an almost intact chapter house. One of the enterprising abbots was accused of minting his own money.

Llangollen is truly an enchanted spot, a gateway to that country of enchantment, Wales.

Essential Information:
Llangollen is located on the A5. Dinas Bran is on the A539 on the north side of Llangollen, and Valle Crucis Abbey is on the A542 about 2 miles north of Llangollen. For more details, dates, booking tickets, etc. for the Llangollen International Music Festival see http://www.international-eisteddfod.co.uk/

Plas Newydd is located on Hill St. Note: Do not confuse this place with Plas Newydd on the Isle of Anglesey.

The Postal Museum is at 41 Castle St.

Text ©2000 by Barbara Ballard. Reproduction of this work in whole or in part, and reproduction in electronic media, without documented permission from the author is prohibited.

More self catering near Llangollen

More bed and breakfasts near Llangollen This detached cottage is located close to the village of Llangollen near Ruthin, and can sleep four people in two bedrooms.
Sleeps 4

This end-terrace cottage is located near the village of Llangollen close to Ruthin, and can sleep two people in one bedroom.
Sleeps 3