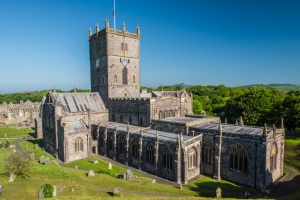 David is the patron saint of Wales, and the details of his life are now clouded by a mix of myth and legend that may obscure the truth of this remarkably influential Christian leader. Much of what we know about him was not set down in writing until the early medieval period.

It seems that David was born to the royal house of Ceredigion, some time around 530 AD. Another version has him born at Henvynyw (Vetus-Menevia) in Cardiganshire. He became a monk and founded the monastery of Mynyw (Menevia) at what is now St David's in Pembrokeshire. The current St David's Cathedral was built on the traditional location of David's monastery.

Like many contemporary church leaders, he was a bishop as well as an abbot. His monastery was a popular centre of learning, especially among Irish scholars.

A host of legends sprang up about David after his lifetime, and it can be hard to determine the truth amongst so much hyperbole. One of the tales credits David with responsibility for the traditional Welsh symbol of the leek. The tale goes that the Welsh were preparing to do battle with the Saxons. On the advice of St. David they all put leeks in their hats so they could easily distinguish themselves from their enemies in the heat of battle.

David was also woven into the fabric of Arthurian legend. Many medieval versions of his life say that he was Arthur's nephew, though Geoffrey of Monmouth - a writer not noted for his historical accuracy - calls him Arthur's uncle.

Some versions say that David was educated by Illtud at the monastery school of Llantwit Major. Given the wide influence and reputation of Illtud's school, this account at least seems plausible.

David was reluctantly persuaded to attend the Synod of Brewi, where a hill miraculously rose before him. He preached so loudly from the top of this hill that he converted Pelagian heretics from their folly. Subsequently, David is said to have asked King Arthur to allow him to move his Bishop's see from Caerleon to Menevia. This granted, he ruled the church in Wales until his death at the ripe old age of 147 years.

It seems likely that David died around 589, a respected and influential leader of the early Christian church in Wales. It also seems likely that under David and his fellows, the Welsh undertook a certain amount of missionary work, though little of this was aimed at the neighbouring pagan English, but rather their fellow Celts in Cornwall, Ireland, and Brittany.