In England, the period from 800-1000 AD is often called the late Anglo-Saxon period, and in some measure, the same can be said for Wales, in as much as the constant threat and tension created by the presence of powerful Anglo-Saxon kingdoms to the east helped define and create a sense of separate identity and even nationalism - though that nationalism was often overshadowed by regional interests.

Numerous attempts were made throughout this period to create, if not a nation of Wales, then at least larger and more powerful kingdoms within Wales.

One of the early leaders of these tentative movements toward nationalism was Rhodri ap Merfyn, later to be known as Rhodri Mawr (Rhodri the Great).

Rhodri was the son of Merfyn, king of Gwynedd, and Nest of Powys. Through marriage more than conquest, Rhodri was the ruler of a realm stretching from Anglesey to the Gower peninsula by the time of his death in 877. Although the extent of his kingdom would have been enough to make Rhodri's fame, he was more famous as a warrior, a fame that was noted in places as far afield as Ulster and Liege.

Rhodri's greatest triumph came in 856 against a force of Danes who made landing in Anglesey. The struggles of Rhodri and his fellow Welsh leaders were not all with the Danes. An equally potent threat lay to the east of Offa's Dyke in the form of the English. The English kings of Mercia made several attempts to take Powys - with temporary success in 822.

Just seven years later Mercia itself succumbed to the growing might of Wessex, and from that point, the southern kingdom posed an ongoing threat to Welsh independence. From 871 the leader of Wessex was Alfred the Great.

Clash of the Titans
In 877 the two "Greats", Rhodri and Alfred clashed, and the Welsh leader and his son Gwriad were killed. In the vacuum following Rhodri's death, Welsh kings, perhaps fearing the might of the Danes more than the threat of Alfred, and fearful of the power of Rhodri's sons, submitted to the overlordship of Wessex.

Eventually, even Rhodri's sons Anarawd (king of Gwynedd and Powys) and Cadell (Seisyllwg) were forced to acknowledge Alfred as their overlord. This step was to have far-reaching consequences, for subsequent English leaders could claim overlordship of virtually all Wales. 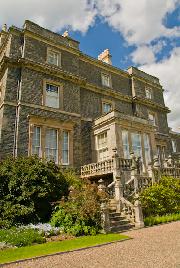