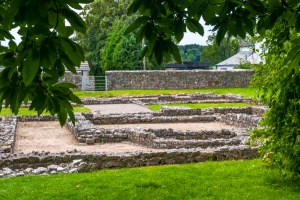 To understand the early history of Roman Wales we have to cast our eyes outside the present borders of the country to examine the political situation in southern Britain.

The king of the Catevellauni in the fourth decade of the modern era was Cunobelinus, who has been identified as the Old King Cole of nursery rhyme fame. This Cunobelinus - the name is that given him by later Roman commentators - had three sons, Caratacus, Togodumnus, and Amminius.

Amminius was exiled by his father for unnamed offences. When Cunobelinus died in about 40AD, Caratacus and Togodumnus took control of the kingdom.

Amminius was not one to give in easily. He appealed to Rome for aid in establishing his claim to the kingdom of the Catevellauni. It was, in retrospect, a rather foolish move, for he provided the perfect excuse for the Romans to invade Britain.

In 43AD, 40,000 Roman troops under Aulus Plautius landed in the south-east of England. They dealt speedily with the Catevellauni, and established a strong military presence in the south. The preliminary frontier of the new Roman territory was the Fosse Way, a road running from Exeter to Lincoln.

Beyond the Fosse lurked the Brigantes in the north, and the tribes of Wales, notably the Silures in the south-east. Carataucus fled to the Silures, and induced them to take up arms against the Romans.

The Romans quickly realised the importance of cutting off the tribes of Britain from each other and dealing with each individually. They moved into the north of Wales against the Deceangli, and established forts along the frontier with the Silures, notably at present-day Gloucester and Usk.

The ever-pugnacious Caratacus - the Caradog of Welsh legend - moved north to carry on the fight in the territory of the Ordovices in Anglesey and Caernarfon. There, in 51AD, he was defeated and his family captured. He fled again, this time to the Brigantes, where he could be forgiven for expecting a warm welcome.

Instead, the queen of the Brigantes, Cartamandua, betrayed him to the Romans. This proud Celtic warrior was taken in chains to Rome, where he is said to have remarked, "Why do you, with all these grand possessions, still covet our poor huts?".

But the Romans did not have it all their own way in Britain. The Silures defeated the forces sent against them in 52AD, and the grip of the Romans on their new British territory remained a troubled one. Fresh campaigns in 57 and 60AD struck deep into Welsh territory.

The latter campaign was directed at the seat of druidical power in Wales, the Isle of Anglesey. According to the Roman historian Tacitus, the legionaries doffed their clothes and swam naked across the Menai Strait to do battle with the druid-led Celts.

Just when it looked as if the Romans would be able to subdue the Welsh tribes, a revolt by the Iceni in Norfolk broke out, led by their queen, Boudicca (Boadicea). The Roman forces were diverted, and the Welsh territory remained under very tenuous Roman control for several years.