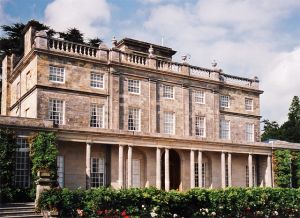 Saint Hill Manor
Saint Hill is an attractive Georgian manor house on the fringe of East Grinstead, built by Gibbs Crawfurd in 1792. The Manor was restored to its original condition by L. Ron Hubbard, founder of the Scientology movement, and contains exhibits relating to Hubbard's life and voluminous writings.

The earliest mention of Saint Hill comes from 1567, but the estate we know today was really the result of several land purchases in the mid-18th century by John Crawfurd, a native of Ayrshire. Crawfurd's son Gibbs, rebuilt the manor house in 1792 in the style of a country manor house, using sandstone quarried at West Hoathly.

The 18th century house was extended with the addition of a pair of wings by Edgar March Crookshank. The property was later owned by The Maharajah of Jaipur until it was purchased by author L. Ron Hubbard in 1959. Hubbard researched the manor's history and worked out a meticulous plan of restoration, bringing it back to its Georgian roots, with beautifully polished woodwork, marble floors, and fireplaces.

The 'Monkey Room' contains a fabulous 1945 mural painted by John Spencer Churchill, nephew of Sir Winston Churchill. Look for a capuchin monkey that is a caricature of the artist's famous uncle. The Monkey Room was intended as a cinema room by the owner of the time. Churchill researched his mural by sketching monkeys at London Zoo for 3 months, followed by another 3 months painting the mural. The result is a beautifully detailed work of art, with 145 monkeys from 20 species.

Another highlight are the columns of black Spanish marble in the entrance hall, installed by the Maharajah of Jaipur. The library is given over to displays on the life and work of L Ron Hubbard, with copies of the 560 published works on display.

The manor sits in almost 60 acres of grounds, with landscape gardens dotted with lakes, and areas of woodland with walking trails. The house and grounds are open all year round. Advance booking is required.