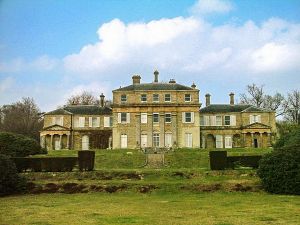 Hammerwood Park
Hammerwood is a mansion built in 1792 for John Sperling by Benjamin Latrobe, then an unknown architect, who went on to design the White House in Washington, D.C. The interior features a fascinating full-scale replica of the Elgin Marbles. The house was once owned by the rock group Led Zeppelin.

In 1792 John Sperling purchased an estate called The Bower in East Grinstead. Sperling called in a promising young architect from Yorkshire named Benjamin Latrobe to enlarge and enhance an existing house on the site. The house seems to have been oriented to look out towards iron workings in the valley below, which presumably is why Sperling renamed the house 'Hammerwood'.

Working together, Latrobe and Sperling created a fantasy mansion, a mock temple dedicated to Apollo and the arts of hunting. Parts of the house were modelled on the Temple of Apollo on the island of Delos. The Apollo theme is carried on throughout the house with plaques resembling classical friezes. Over the library doorway is a Coade plaque styled after the Borghese vase in the Louvre, with Apollo playing a reeded pipe, surrounded by a mix of gods and mortals.

Like many large country houses, Hammerwood suffered as death duties and the changing social landscape spelled the end of traditional large estates in the 20th century. Hammerwood was requisitioned by the military in WWII and used as a barracks for 200 soldiers including the famous cricketer, Denis Compton. A temporary runway was built in the nearby woods, and tanks hidden among the trees in the park.


After the war, the house was divided into flats, but the decaying house did not keep its tenants long, and in 1973 it was put up for auction. The winning bid came from the rock group Led Zeppelin, who planned to turn the house into a recording studio and communal living space for band members and their families. Ongoing dry rot and overseas work commitments meant the group's plans were never carried out. The house was left vacant and was subject to vandalism. Lead was stripped from the roof and the interiors left to decay.

In 1982 the Park was purchased by David Pinnegar, grandson of a former owner. Over the next few years, it was completely restored, with the aid of numerous volunteers. The result is very much a family home rather than a historic showpiece.

More self catering near Hammerwood Park >>