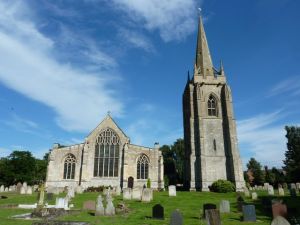 Fleet is a small village in the South Holland District of Lincolnshire, near Holbeach. The medieval church of St Mary Magdalene is unusual in that the tower and spire are detached from the main body of the church, a style more commonly seen on the European continent.

The church dates to the late 12th century. The most striking feature is its detached bell tower, with a spire reaching 120 feet. The tower was built 15 feet from the body of the nave. Much of the interior is in Decorated Gothic style, popular during the 14th century. The chancel was rebuilt in 1860, but thankfully the original medieval sedilia with its carved canopy was left untouched. There is a very worn 14th-century effigy and a reredos erected in 1790.

The church was granted by Fulk of Fleet to the monks of Castle Acre Priory sometime before 1161. The grant was later confirmed by Fulk's son Josce, who seems to have left to take part in the Second Crusade shortly after, and it seems likely that he died while on Crusade. Josce's son Richard disputed the ownership of St Mary's with the Priory at Castle Acre and gave 50 acres at Fleet to the Knights Templar.

Richard may have been a member of the Knights Templar, which would explain his large grant of land. Richard later built a hospital at Fleet, with a chapel for his own family's use. The Templars held sway at Fleet for several centuries and held an annual fair here near the site of the present Bull Inn. Fleet became a prosperous place, larger and wealthier than Spalding by 1260.

In the 18th century Fleet became a popular stopover for coaches. Legend has it that the notorious highwayman Dick Turpin took advantage of the coaches travelling the roads around Fleet and used the Bull Inn to stable his horse. One story says that he hid from the authorities in the inn's chimney.

South west of the village stands the site of a Norman motte, dated to the late 11th or early 12th century. The motte has now suffered from ploughing damage so not much is left to be seen.

The Meridian passes through Fleet at Langarygate, and a stone monument of a low plinth marks the spot. 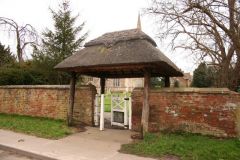 More self catering near Fleet >>

More bed and breakfasts near Fleet >>