HERITAGE HIGHLIGHTS:   Blacksmithing has been carried on here for over 200 years 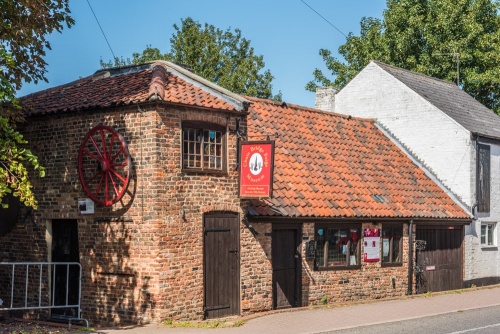 On the east bank of the River Welland, a short stroll from historic Ayscoughfee Hall in the heart of Spalding, stands a small 18th-century building that has been used as a blacksmith's forge and workshop for over 200 years. Chain Bridge Forge has been brought back to life as a (free) living museum showing how blacksmithing took place on this site.

The Forge takes its name from Chain Bridge, one of three historic bridges across the River Welland. We do not know when the first Chain Bridge was built but it is depicted on a 1732 map of Spalding. The bridge was built in three sections. The central section was hinged at both ends and could be raised on chains on both sides, allowing boats to pass through the opening.

By the 1840s the Chain Bridge was outmoded. One child died trying to cross over the river on the chains, and boats reported getting rigging caught up in the chain mechanism. In 1844 the old bridge was pulled down and replaced with a swing bridge made of iron and wood.

The new bridge was dedicated to Prince Albert, but traditions die hard, and local people insisted on calling the bridge itself and the area around it Chain Bridge, as they had always done. So, naturally enough, the historic blacksmith shop is known as Chain Bridge Forge. As for the bridge itself, it was pulled down in the 1960s and rebuilt 80 metres downriver with a new concrete bridge. The first blacksmith probably occupied Chain Forge just prior to the year 1800. Most of the smith's trade was in servicing boats navigating the River Welland to Spalding Port.

In 1899 the Dodd family purchased Chain Forge. The first blacksmith that we know of for certain was George Dodd from Heckington, who lived nearby on High Street with his wife and three children from 1901. It seems likely that George Dodd gave up on the farming practised by his family at South Kyme Fen after the agricultural depression of the 1880s and 1890s.

George Dodd apprenticed as a blacksmith at Swineshead and worked with racehorses at Newmarket to raise money. He married the daughter of a horse trainer and moved to Spalding in 1898. He rented the Forge for an annual fee of £16 but then bought it outright a few months later along with the house across the road. That house has been the Dodd family home ever since.

Not only was George Dodd an RSS (Registered Shoeing Smith) but he served as the Harbour Master. This job paid him £5 per year. He received another £5 per year for managing the Chain Bridge beside the forge. He got another shilling every time the bridge was opened to allow a boat through. 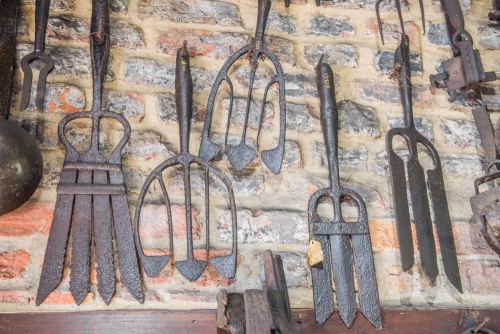 A collection of forged eel spears

Three generations of the Dodd family worked as blacksmiths at the Forge. George was followed by his son Banks 'Jim' Dodd and his grandson Geoff Dodd. From the 1950s one of the Forge's jobs was to build Flower Parade Floats.

The final Dodd blacksmith sold the forge to the South Holland District Council in 1989. It took over 20 years but in 2011 a charity was formed to develop the site and transform it into a living heritage museum and visitor centre.

The Friends of Chain Bridge Forge hold regular demonstrations of blacksmithing where you can watch a skilled smith at work. Not only can you watch the smith working but you can have a go at being a blacksmith yourself.

Even when the blacksmith is not working you can explore the historic riverside building with its displays of blacksmithing tools and displays of traditional crafts. The Friends of Chain Bridge Forge also have a portable forge which they take to demonstrations, school events, and 'taster' experiences to show modern residents what this traditional craft was all about.

The Forge also takes on commercial commissions and has an online collection of over 7000 objects connected with the social history of the South Holland region. You can buy iron objects crafted by the on-site blacksmith in the small shop area. 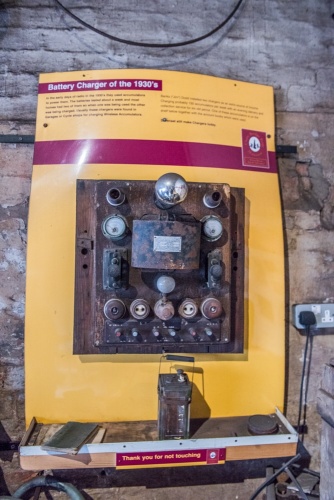 There is a special display on historical battery charging. That might seem odd at first, but as the volunteer guide told us, the Forge offered a battery charging service in the 1930s.

When radios first came into fashion they were powered by accumulators which lasted about 1 week. Most homes had two accumulators so that one could be charged while the other was in use. Garages and cycle shops often had a sideline business charging accumulator batteries for wireless sets.

Banks 'Jim' Dodd saw a business opportunity and installed two chargers in the Forge, using them to charge about 150 batteries per week. He offered a pickup and delivery service for an extra charge. You can see an accumulator on display as well as the Forge's account books used to track customers for the charging service.

There is no dedicated parking at the Forge but there is parking available along High Street. we found it easy to get a parking space a short stroll from the Forge. 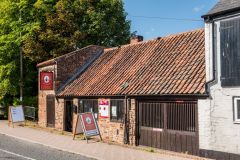 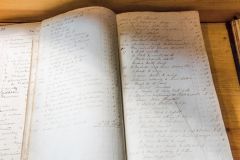 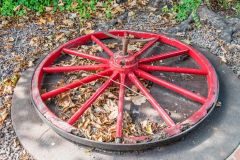 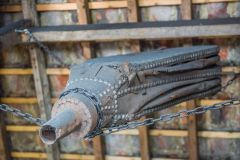 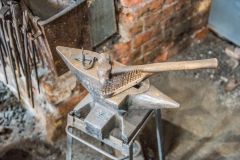 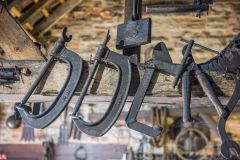