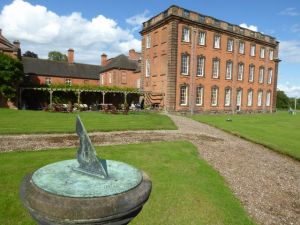 Chillington Hall
The manor of Chillington has been the home of the Giffard family since 1178. The current manor house is an elegant 18th-century red-brick house built by Smith of Warwick in grand Palladian neo-classical style.

The interiors feature lushly decorated Baroque chambers and a later salon designed by Sir John Soane. The Dining Room boasts a collection of fine furniture by Gillow of Lancaster, as well as a collection of family portraits. There are fine decorative plaster ceilings in the Morning Room and Main Oak Staircase.

The house stands in a landscape park laid out by Capability Brown in the 1760s, containing Brown's largest purpose-built lake (70 acres in area), created by damming a stream through the property. Within the park are a variety of classical buildings, including a temple (also by Soane) and the dam, altered by Brown to look like a bridge.

We know little of the 12th-century house here, though it seems likely that it was predated by a still earlier Saxon manor. The 12th-century manor was replaced in the Tudor period. The core of that Tudor house still survives within the 18th century Salon.

The manor was damaged by fighting during the Civil War, then in 1724, Francis Smith of Warwick was hired to create the south side of the house. In 1786 Thomas Giffard hired Sir John Soane to create an entirely new house. The old Tudor manor was torn down, with the exception of Smith's south wing. Soane created a light and airy mansion, though the exterior is restrained, almost plain compared to some of the excesses of the late 18th century!

Within the grounds stands The Giffard Cross, which marks the location of one of the most dramatic incidents in the long history of the Giffard family at Chillington. Sometime during the reign of Henry VIII, a panther escaped from a menagerie owned by Sir John Giffard.

The panther was about to spring upon a defenceless woman and child when Sir John drew his bow and shot the animal dead. In honour of this act, the family was granted a pair of armorial crests, one depicting a panther head, the other showing an archer drawing his bow.

More self catering near Chillington Hall >>