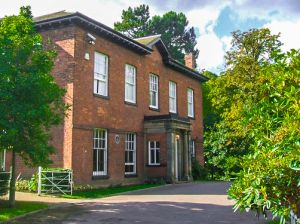 Bantock House and Park
A listed family home filled with heritage and craft objects. Located on 43 acres of parkland; visitors can walk the dogs, play a game of golf or just relax in the beautiful setting of the Park’s formal gardens.
What to see
The beautifully furnished interiors of Bantock House hold wonderful collections of objects related to the heritage of Wolverhampton, including exhibits on famous industrialists like Charles Chubb. The ground floor tells the story of the Bantock family and how they lived, while upstairs the museum focuses on the social history of Wolverhampton and some of its most prominent citizens.

There are displays of ceramics and English porcelain, including Delftware, Bloor Derby, and Royal Worcester, plus locally crafted jewellery, and enamel ware. There are children's toys and dolls to enjoy, and a regular series of lectures on local history. Learn how the servants of Bantock House lived and worked in the late Victorian period.

History
In 1884 Thomas and Mary Bantock bought Merridale House, on the outskirts of Wolverhampton. The house was built in the 1730s as New Merridale Farm, and is now Grade II listed for its heritage value.

Bantock was a Scottish railway and canal agent, who would rise to become Mayor of Wolverhampton, a post also filled by son Baldwin.

Baldwin Bantock transformed the original farmland surrounding the house, creating a series of gardens including a Sunken Garden and Rose Garden, with floral borders and a woodland garden area. The house and garden sit in 48 acres of parkland, with recreational facilities and nature trails. The Bantock family grazed a herd of Highland Cattle here until the 18930s, and as a memento of this time a sculpture of a cow by local artist Neil Watt stands in front of the house.

Baldwin left the house to his wife Kitty, on the understanding that she bequeath it to the town of Wolverhampton on her death. Kitty did not wait, and gave the house and surrounding parkland to the town shortly after Baldwin's death in 1938.

The house and park served as a base for the Home Guard in WWII. When peace came, the house was opened to the public as a museum.

Inside the house, visitors are invited to use hands-on activities to unlock the secrets of Wolverhampton’s industrial past.

Entry to the House and Park is free and both are fully accessible. Free parking.

More self catering near Bantock House and Park >>

More bed and breakfasts near Bantock House and Park >>