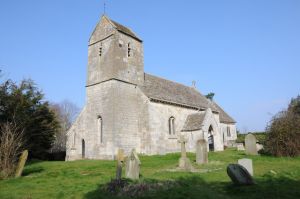 Brookthorpe, St Swithun's Church
A simple country church with a very nice saddleback west tower. The church is tucked behind the manor house of Brookthorpe Court. The church is primarily 13th century with the addition of a Victorian north aisle.

The church consists of a nave, north aisle, west tower, north vestry, south porch, and chancel. Most of the church is Early English in style, including the chancel arch.

One of the more interesting features is the inscription on the wall plate of the south porch. It is in the form of a chronogram, a form of hidden code where one letter in each word stands for a number in a date.

In this case, the chronogram translates as the date of the execution of Charles I in the Civil War - presumably this was a way of expressing secret support for the Royalist cause.

There is a Jacobean pulpit and a font of similar age, shaped like a chalice. In the nave is a memorial to architect Detmar Blow (d. 1939). In the tower is a memorial in Baroque style to George Venn, who died in 1694.