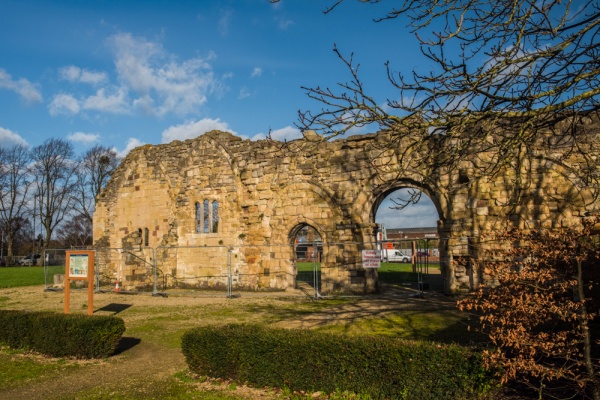 Around the year AD 900 Aethelred, Earl of Mercia, and his wife Aethelflaed, daughter of Alfred the Great, founded a church beside the River Severn. The Saxon church stood between the royal palace of Kingsholm and the fortified town, or burh, known as Gleaweoceastre.

It takes a great deal of imagination to visualise the riverside setting today, for the course of the river has changed dramatically over the years, and the nearest branch of the river now runs through an underground culvert. In the early 10th century, however, the church, which was granted the status of a free chapel royal, would have stood close beside a busy river, with boats transporting goods coming and going with great frequency.

Founding a church so close to the Severn was fraught with risks, for Viking raids along the coast were frequent. The new priory church was built with Roman stones from sites around Gloucester and served by a group of secular canons.

The church was initially dedicated to St Peter, but it seems that Aethelflaed soon had other ideas, for in AD 909 she had St Oswald's bones brought here from his burial place at Bardeney, Lincolnshire.

It must have been quite an expedition, for Lincolnshire was in Danish territory. Aethelflaed and her brother Edward, King of Wessex, led a force of soldiers into Danish territory and seized St Oswald's bones. A new shrine was built to house the remains of the warrior king of Northumbria, who died in AD 642. 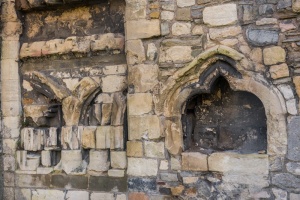 A medieval piscina and carved stones

A mausoleum was constructed for the royal founders, and both Aethelflaed and Aethelred were buried here near St Oswald's shrine. The mausoleum may have been built by Aethelstan, Aethelfled's nephew and future king, who was brought up at the royal palace of Kingsmead. Archaeological investigation in the 1970s unearthed a beautifully carved fragment of a 10th-century tomb in the crypt. Could the carved stone have come from the royal couple's memorial?

The 'New Minster' of Gloucester became a wealthy foundation, and gained a reputation for miracles. The combination of wealth and miracles led to its popular nickname, 'The Golden Minster'.

Aethelstan's successors as king were not so supportive of the priory. In the reign of Cnut the priory estates were used to endow a royal clerk.

The archbishops of York were given control over the minster church in 1093, and they refounded it as an Augustinian friary in 1152, replacing the secular canons. The church was enlarged from 1150 when the arches we see today were inserted to give access to a north aisle. It was extended again after 1230 by the archbishop of York.

St Oswald's grew to become an important place of pilgrimage, but it suffered because it was so close to St Peter's Abbey (now Gloucester Cathedral). As the Abbey grew in importance, St Oswald's dwindled in size and influence. 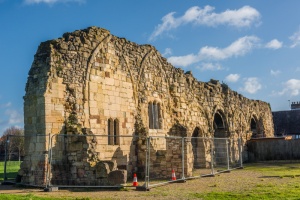 The Priory ruins from the west

The priory was dissolved by Henry VIII in 1536, but the friary church was saved from destruction to serve as a parish church from 1548. The end came in the Civil War siege of Gloucester in 1643, when the priory buildings were largely destroyed by Royalist cannon fire. In 1653 the church was pulled down, and the stone was used to build a nearby market house.

The only part of the priory buildings to survive are sections of 13th-14th century walls and arches. Excavations revealed a mould for casting a bell, suggesting that the church had a belfry. The bell mould was carved with the symbols for the Greek letters alpha and omega, often used in Christian symbolism to represent God. A collection of carved Saxon stones from the friary are now in the city museum.

St Oswald's Priory is just a few minutes walk from the cathedral, situated in a public park just around the corner from St Mary de Lode church and Bishop Hooper's memorial. The site is open at any time, though when we visited there were fences in place due to safety concerns over falling masonry. It is still very easy to wander around the site and even through the fences we could easily see the medieval stonework. The highlight for me is the window tracery and a piscina set beside a collection of carved stones in a wall niche. 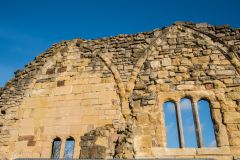 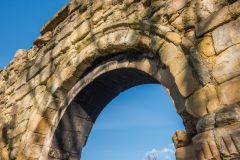 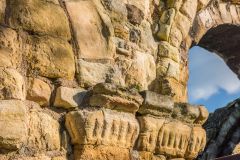 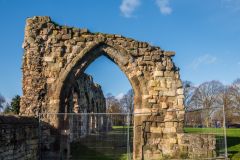 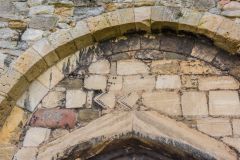 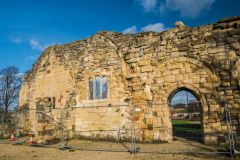