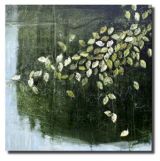 If you enjoy both history and art, here's an intriguing show at the Hart Gallery in London that may interest you: artist Lewis Noble spent a year painting Chatsworth House, one of Britain foremost stately homes. The results of Noble's work can be seen in "Chatsworth Reflected 2009".

I was immediately intrigued when Lewis Noble asked if he could spend a year working at Chatsworth and I have logged on to his web site frequently to see how his work is progressing. We have had two wonderful large canvasses on display throughout the autumn in the Paxton Greenhouse that runs up the hill from the Orangery shop to the stables, and I am very excited at the prospect of seeing a large number of his works exhibited together. Although the web site is first class, seeing the real thing will I know be even more impressive.

Not surprisingly Lewis Noble has been seduced by the water at Chatsworth; not only the grand formal lakes and fountains, but also the smaller streams and the rain, of which we have had a great deal, which helps to fill them. He seems to have spent a lot of time beside the River Derwent into which all the brilliantly engineered waterworks eventually disappear.

I am delighted that a thoughtful and contemporary artist such as Lewis Noble should have wanted to devote a whole year of his working life to painting in and around the Estate. His work will add a new layer to the impressions of Chatsworth that have built up over 400 years, and which themselves shape the way the place is imagined.

This unique project extended through to May 2009, ending with an exhibition at the Hart Gallery, London.

“I have started by producing a lot of paintings and drawings directly in the landscape and gardens as I like to paint outside to get the feel for a place.  I am also making a series of large scale studio oil paintings, developing themes and subjects from the work made on site. If you visit the central area of the Paxton Conservative in the gardens over the next few weeks you should be able to see the first of these on display.”

I've visited Chatsworth several times, and I can't imagine a more fascination subject for artwork than this lovely historic house.