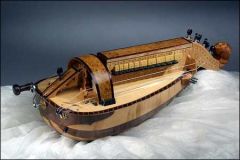 Historic Berkeley Castle, in south Gloucestershire, has launched a Treasure Hunt to take place throughout the summer, with clues scattered around the castle Gardens. The Treasure Hunt is suitable for adults and children and has been designed to encourage visitors to explore the Gardens looking for clues.

The questions range from how many chimneys you can see from a certain place on the lawns, to slightly more cryptic questions – for example; What fish is before the baby moon?

All correct entries will be entered into a monthly prize draw to win book tokens. The Treasure Hunt will be available all Summer and the proceeds are going towards the conservation of the Castle’s Hurdy-Gurdy.

What is a Hurdy Gurdy?

The Hurdy-Gurdy is a fascinating instrument which dates back to medieval times, but which is today enjoying a popular revival in many countries, particularly France, both as a folk instrument and for the performance of medieval and 18th- century music. The hurdy-gurdy is a string instrument with a wheel (or circular bow) which sets several melody and drone strings vibrating together. The melody strings are stopped by tangents attached to sliding keys. The term “hurdy-gurdy” was later (erroneously) used to describe barrel organs and street pianos in the 19th and early 20th centuries. Once restored Berkeley Castle’s Hurdy-Gurdy will be able to be played once again.

Berkeley Castle is a beautiful and historic Castle, begun in 1117 and still remains the home of the Berkeley family. The Castle was the scene of the brutal murder of Edward II in 1327 (you can see the cell where the unfortunate king was kept prisoner) and was besieged by Cromwell’s troops in 1645. The Castle is surrounded by lovely terraced Elizabethan Gardens, Elizabeth I’s bowling green and sweeping lawns. Berkeley Castle is open Sunday – Thursday during June, July & August. During September and October the Castle is open on Sundays only. See the  Berkeley Castle website for full details.

I've visited Berekely Castle on several occasions, and can heartily recommend it for a family day out!

The Luib Hotel is an ideal place to stay for travellers needing to relax conveniently situated midway between Killin & Crianlarich with its backdrop of magnificent mountain sceneery. The Luib provides comfortable guest rooms freshly-cooked …