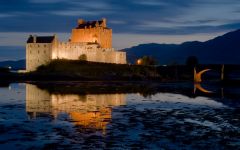 I happened across a great list of the top 100 songs of all time yesterday. That got me thinking what my own 'top picks' are among all the thousands of wonderful historic places I've had the pleasure of visiting across the UK. So here's my first list: the top 25 castles to visit in Britain.

There are literally hundreds of marvellous castles to choose from, so this is not an exhaustive list; it is limited to those that the Britain Express family have personally visited. These are our favourite castles, places that we have enjoyed and think that you will too! Each castle has a link to more information, including location details and nearest accommodation.

Whew! That was hard! It was very difficult to pare my list of favourites down to only 25! This list will be periodically updated as we visit more castles around the UK, but for now, you won't go wrong with any of the castles on this list.