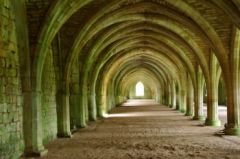 The magnificent ruins of Fountains Abbey, near Ripon, Yorkshire are a treat to visit at any time. Now the abbey is offering special; Winter guided tours. Tours are held every Sunday through 4 January, and begin at 1:30 pm. Tour guides will explain the story of the abbey and the monks who lived there from the 12th century until the abbey was dissolved by Henry VIII in 1539.

Tours are free to join, but regular admission prices to the abbey apply. Admission to Fountains Abbey also includes Studley Royal Water Gardens, a magnificent 18th-century garden designed by John Aislabie, former Chancellor of the Exchequer to George I.

Fountains Abbey was founded in a remote valley setting by the Cistercian order, and grew to become one of the richest and most influential monasteries in Britain during the Middle Ages. The abbey ruins are simply superb, a symphony of medieval carving and architecture of the highest order.

If you are in the area you might also like to take in the evening illuminations. This winter tradition allows visitors to see the abbey ruins lit up at night - an unforgettable sight. See the Fountains Abbey events calendar for times and dates.